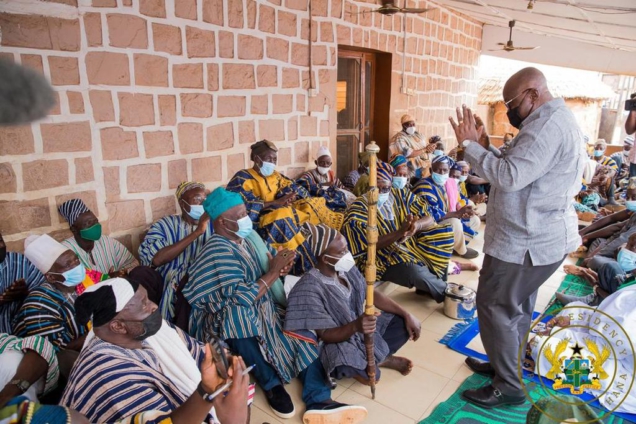 The Overlord of Mamprugu has applauded President Akufo-Addo, for facilitating the successful completion of several projects which have been on the hearts of the chiefs and people of the traditional area for many years.

According to the Nayiri, Naa Bohogu Mahami Abdulai Sheriga, the impact of the work undertaken by President Akufo-Addo has been felt by the entire country, especially the people of the North East Region.

“The above-mentioned projects, have been on the request list of Mamprugu for years, which eluded us because it passed on from government to government. Certainly, we owe you tons of gratitude,” the Nayiri added.

Naa Bohogu Mahami Abdulai Sheriga made this known on Tuesday, when the President paid a courtesy call on him at his palace, as part of his two-day tour of the North East Region.

The Nayiri also expressed gratitude to President Akufo-Addo for the Pwalugu Multi-Purpose Dam and Irrigation Project, which he described as the “Super Game Changer Project in the North”, which will result in the provision of electricity, and 25,000 hectares of irrigation facilities.

“The Dam I also understand, will serve as a receptacle to collect all water up stream which has been the source of the region’s perennial flooding,” he added.

Touching on the pro-poor policies implemented by the Government of President Akufo-Addo since 2017, such as the free Senior High School policy, Planting for Food and Jobs, One-constituency-One Ambulance, the expansion of the National School Feeding Programmme and the introduction of the Nation Builders Corps, the Nayiri indicated that these policies are, “well thought-out and targeted policies that are aimed at reducing poverty. Ours is a young region on which these policies perfectly fit.”

The Nayiri thanked President Akufo-Addo for the appointment of the former Hon. Hajia Alima Mahama to the high office of Ghana’s Ambassador to the United States of America.

“We are forever most grateful. Your appointment of Hon. Mustapha Ussif as Minister of Youth and Sports, Hon. Hajia Abudu Zuweira Lariba as Deputy Minister for Gender, Children and Social Protection is being highly appreciated,” he added.