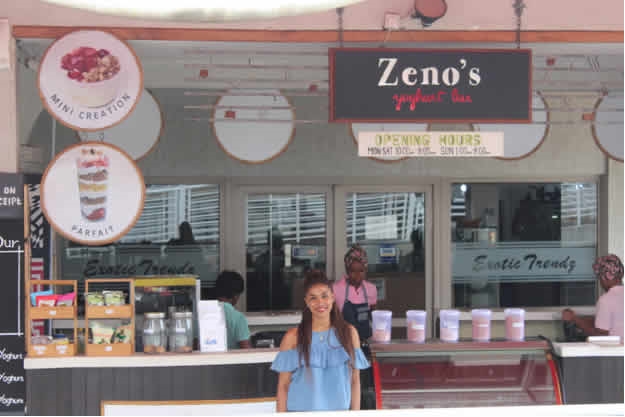 Ghana’s first yoghurt Bar and manufacturers of the first Greek yoghurt are set to open their third yoghurt bar.

This third location will serve as the flagship store and will be opened in November at the new Palace Mall just in time for the festive season.

This follows the success of its two existing yoghurt bars located at A&C Mall and Labone.

Zeno’s loyal fan base should expect larger and more premium offerings at its flagship branch. The yoghurt bars, which offer Greek yoghurt based products is expected to expand its offerings to include savoury varieties.

The founder, Zenobia Bou-Chedid said, “after years of introducing natural yoghurt, particularly Greek yoghurt through our sweet creations, I think it is now time to start exploring our savoury creations. I attempted it two years ago but customers were not ready then”.

Greek yoghurt, which is strained yoghurt that is high in protein and relatively low in fat, has caught on nicely in Ghana. The owner observed that it was an instant hit.

In recent years, yoghurt sales have increased significantly as more and more people are introduced to different ways of incorporating yoghurt into their diet. Zenobia, christened the “yoghurt lady,” has been an advocate in promoting yoghurt and has succeeded in significantly expanding the market for yoghurt through her Zeno’s Yoghurt Bars.

She has been credited with creating this love and a new culture for yoghurt. Through her yoghurt bars, she is able to showcase yoghurt in its full glory.

The yoghurt bars offer beautifully created creations and hope to encourage customers to try making their own creations at home. She also encourages dialogue between customers and herself and loves to connect with them personally. She looks forward to interacting more with her customers and has plans of sharing recipes and creations in the near future.

Her yoghurt bars employ young females. She stated that she feels fulfilled in knowing that she is creating decent employment for young females and providing competitive wages and incentives. She noted that contributing meaningfully to society is a top priority for her.

Asked what the biggest challenges have, been so far she stated that training staff to represent the yoghurt bar, was not always easy and she’s had to develop unique ways of keeping them motivated. Raising money to expand has also been a task.

She also stated that “the necessary support needed in encouraging and guiding local businesses is almost none existent. I hope to help change that. I especially want to be an advocate for this and for female entrepreneurs wanting to venture into sectors that are not considered feminine enough. Starting and running a business should not only be encouraged, but it should also be supported as this will help create employment which will, in turn, contribute meaningfully to the economy.”