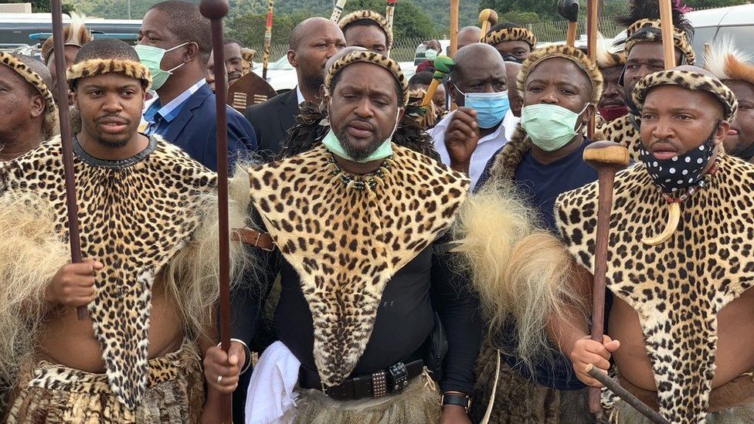 Prince Misuzulu (centre) has called for unity in the Zulu nation

After a year-long family feud, Misuzulu ka Zwelithini is finally to be crowned Zulu King in a traditional ceremony in South Africa on Saturday.

The 48-year-old is the son of the previous king, but some royals argue he was not the rightful heir and that the late king’s will was in fact forged.

Thousands of people are expected at Saturday’s traditional coronation at KwaKhangelamankengane Palace, where the king-to-be will enter the sacred cattle kraal to invoke his ancestors before being announced to both the living and the dead as the new Zulu monarch.

He is expected to wear the hide of the lion that he hunted for the royal event, a key feat in proving he is indeed the chosen one. More than 10 cows have been slaughtered in preparation for the festivities.

Next month, he is to be hosted by the government for a state ceremony.

The throne has no formal political power, but a fifth of South Africa’s population is Zulu and its monarchy remains hugely influential with a yearly taxpayer-funded budget of more than $4.9m (£3.5m).

The Zulu kingdom has a proud history. It is world-famous for defeating British troops during the 1879 battle of Isandlwana.

Its succession battles have always been fierce – and at times, bloody. The legendary King Shaka ka Senzangakhona killed his brother in 1816 in order to take the throne, then was himself assassinated in a plot masterminded by his nephew years later.

But this latest saga, following the death of King Goodwill Zwelithini ka Bhekuzulu more than a year ago, has been an embarrassing public spectacle.

By the time he died last year, King Zwelithini had six wives and had ruled for more than half a century.

In his disputed will, he named his third wife Queen Mantfombi Dlamini Zulu as regent – a sort of caretaker role pending the appointment of a successor.

Queen Mantfombi held the highest status among the king’s wives, because she came from royalty – her father was the late King Sobhuza II and her brother was King Mswati III of Eswatini.

Her marriage to the Zulus came with the condition that her first-born son would be first in line for the throne on her husband’s death.

So when she died a month after becoming regent, their son Misuzulu ka Zwelithini was seen as the obvious choice to take power. He had also been named as successor in his mother’s will.

What’s more, the fact that Prince Misuzulu was the only person to inherit the traditional weapons of his grandfather King Cyprian Bhekuzulu ka Solomon was seen as an endorsement that he would eventually take over from his father.

However, two more of the late king’s sons have been staking their claim to the throne.

Back in March, South Africa’s president formally recognised Misuzulu ka Zwelithini as the new Zulu king, but a legal challenge was mounted by Misuzulu’s brother, Mbonisi Zulu, who asked the court to halt the coronation.

However, the court dismissed his application and allowed coronation proceedings to continue.

Exactly a week before King-to-be Misuzulu’s traditional coronation, his half-brother Prince Simakade was announced as the new monarch by a handful of supporters within the royal family.

His backers say he is the obvious choice as the late king’s first-born son, but traditional Prime Minister Mangosuthu Buthelezi has described this as a “foolish provocation”.

Meanwhile, three of King Zwelithini’s brothers called a news conference on Thursday to announce Prince Buzabazi as their choice, claiming he of all sons had the closest relationship with his father.

Yet Misuzulu has received strong support from other family members who argue that customs dictate he is the rightful heir.