10 football pitches of forest are lost every minute – Study reveals 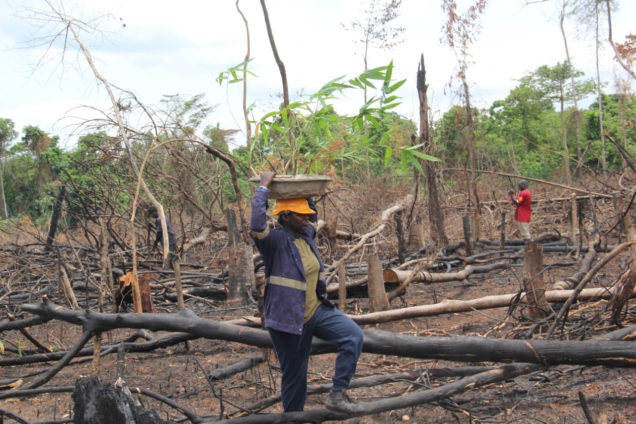 The world lost substantial forest coverage in 2021 – a rate of 10 football fields per minute, according to a new report by Global Forest Watch.

The report which uses forest data collected by the University of Maryland provides a disturbing picture of how the tropics lost 11.1 million hectares of forest cover in 2021.

About 3.75 million hectares were lost in primary tropical rainforest – areas of critical importance for carbon storage and biodiversity.

The loss of primary forests in 2021 led to 2.5Gt of carbon dioxide emissions, equivalent to India’s annual fossil fuel emissions.

The report indicates that the rate of loss of primary forests in the tropics has been consistent in recent years.

The loss is significant because forests provide a buffer against climate change due to the vast amounts of carbon dioxide that they absorb.

Boreal forests, mainly those of Russia, experienced unprecedented forest loss in 2021, largely due to fires.

“These trends underscore just how much action it will take to achieve global zero-deforestation goals. Under the 2021 Glasgow Leader’s Declaration on Forests and Land Use, 141 countries committed to collectively “halt and reverse forest loss by 2030,” the report added.

“Realizing this commitment will require a consistent decline in forest loss every year for the rest of the decade — a decline that is not yet happening in the tropics as a whole.”

However, Indonesia (falling by 25% for the fifth straight year) and Malaysia have seen significant declines in primary forest loss while countries such as Gabon and Guyana have lost 1% or less of their primary forests in the last two decades.

Brazil continues to lead in most primary forestry losses. More than 40% of the loss of primary rainforests in 2021 took place in Brazil, totaling 1.5 million hectares.

According to the report, the rate of loss of primary forests in Brazil has been consistently high over the past few years.

“Loss related to fires has fluctuated depending on the level of out-of-control forest fires, most recently with a spike in 2020 in the Amazon and the Pantanal. Meanwhile, non-fire losses, which in Brazil are most often associated with agricultural expansion, increased 9% from 2020 to 2021,” it indicated.

The Democratic Republic of the Congo (DRC) continues to lose a lot of primary forests as well. The DRC lost almost half a million hectares of primary forest in 2021 due to expanding small-scale agriculture and harvesting trees to meet energy demand.

The DRC’s vast forests are a major global carbon sink, with vast tracts of carbon-rich peatlands.

“Big changes are needed to curb this persistent high rate of loss, including development pathways that do not involve agricultural expansion into primary forests and providing urban and rural communities with access to affordable clean energy to reduce reliance on charcoal and other forms of wood energy.”