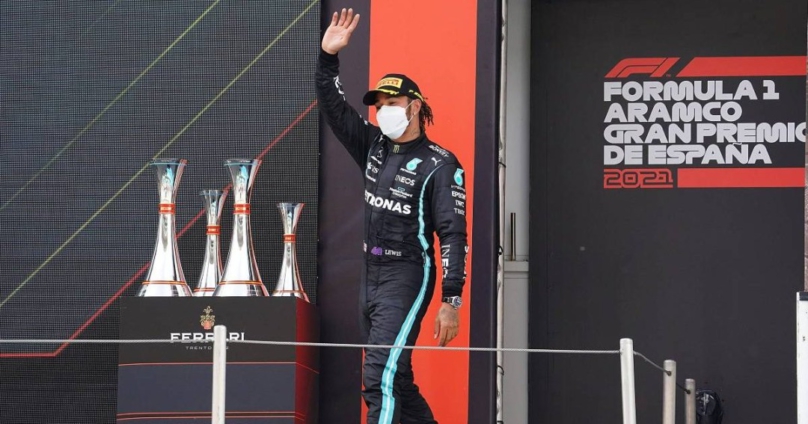 On a weekend which produced a double dose of centurion achievements, the Spanish Grand Prix was not short of a spectacle as Hamilton stole the win from Verstappen after making a century of poles on Saturday.

Verstappen, who had his 100th race for Red Bull will be disappointed with his second place finish after Hamilton’s overtake, but the Dutch admitted ‘he saw it coming’.

Besides these and the last minute rush for 10th place, here are five things we picked up from the Spanish GP.

When Verstappen snatched first place from Hamilton at Turn 1 of the first lap, maybe there were thoughts that Hamilton failed to defend his lead properly in what was a very fiery start.

Also, after Hamilton failed to follow Vertsappen into the pit lane, at a point he could have gained an advantage on the Dutch, there were extra thoughts that the Brit and German car makers had missed their chance. However, what no one knew was what they had up their sleeve – and that was a second pit stop, giving Hamilton fresher tyres. Meaning, the Brit had extra meters in speed, as well as a chance to steal the lead from Verstappen who was running away – and stealing was what Hamilton did.

At the time the Mercedes racer exited the pit lane after his second pit stop, he was a shade above 22 seconds behind Verstappen, but Hamilton ended the race 15 seconds ahead of the Dutch.

The fresh tyres of Hamilton coming from his second pit stop did the job against Verstappen’s mediums, after the Red Bull’s driver’s first pit stop in the 25th lap. The Dutch eventually went in for a second pit stop, but it was too late by then as Hamilton had closed the 22+ seconds gap, and had overtaken the Red Bull driver, setting up a +15 seconds lead.

It was no secret Mercedes were going to have to come up with ingenuous ways of staying ahead of Red Bull and the rest of the pack, as the Dutch look to come out for blood this season.

Without a doubt, the German car makers have been dominant in the last decade, but there were doubts as to if they could withstand fierce competition should any of the teams decide to push their limits. So far, Mercedes have taken strides in putting doubts to bed.

In the build up to the Spanish GP, Hamilton indicated that Red Bull were still making mistakes they[Mercedes] could pounce on, and perhaps Red Bull’s decision to make their first pit stop at the time they did (the 25th lap) was another mistake – too early a pit stop perhaps?

Mercedes will be happy though as Red Bull’s move played into their hands and their strategy. Just some few laps to the end, Hamilton expressed doubt about catching up with Verstappen as his new medium tyres started to look like they were wearing out. However team principal Wolff indicated that the Dutch was going to be worse off.

“Ok we think Verstappen won’t have much left too.” was Wolff’s reply to Hamilton, and that was exactly what happened.

Verstappen was unable to hold on to the lead as Hamilton came rushing past him in the 60th lap.

Bottas’ long-term Mercedes future could be on the brinks

On Saturday, Toto Wolff ruled out any form of mid-season move for Bottas, putting to bed any rumours about the Finnish leaving the German team right in the middle of the season.

Prior to the Spanish GP, rumors circulated the media lining up the Finn for a move away, with George Russel coming in the other way. During Thursday’s presser, the driver did well to squash such hear-say before his team principal’s seal.

However, proceedings on Sunday afternoon may prove that the Finn’s long-term future with Mercedes might be short, if not his short-term future being shorter.

With Hamilton chasing down Verstappen with 24 laps to go and more than a 22 seconds deficit, the Finn(who was second) was asked to let Hamilton go through, but the action was not as straightforward as the command. It took Bottas a long time before he let Hamilton go in ahead.

It was proven Hamilton actually lost time when he was held up by his teammate – the Brit was posting a fastest lap time at that moment.

Despite Toto Wolff playing off the situation by saying the team got the win in the end, indicating he will have felt different had the result turned out against them proves the principal was actually mad at his second driver for disobeying direct orders.

This season there has been much talk about George Russel taking Bottas’ seat at Mercedes, and Wolff squashing rumours of a mid-season move does not completely take the Finn leaving after the end of the season off the cards too.

Time will be the best judge of this one. Grab your popcorn.

Ferrari on course for Revival

2020 was surely a year to forget for the Italians as they fell out of the top three and ranked sixth in the constructor standings. Therefore this season is definitely planned out to be a redemption one for the Italians and they are redeeming themselves in style.

It could still just be early days, but Mattia Binotto will be happy with the output.

McLaren are having a good season

McLaren are 3rd on the constructor standings with 65 points. After four races this time last year, Lando Norris had accumulated 36 points, while Carlos Sainz had 15 but this year, McLaren drivers, Norris and Daniel Ricciardo have tallied 41 and 24 points respectively.

Norris even put up the race of his life when he finished 3rd at Imola. The young Brit could have even finished in second place, but Hamilton after his mistake which sent him down into 9th, was not feeling generous enough to yield any more places.

McLaren are pushing the limits of the midfield teams this season, and during races they continuously look to compete with Ferrari for the fourth to sixth positions.

Their performance so far will put a big smile on the face of Andreas Seidl, despite it being quite early.

Race four of this season’s 23 is done, and it put up a spectacle many were craving to see.
Formula 1 goes to Monaco on the 23rd, as Red Bull will be in search of a response to Mercedes’ brilliance.