5 out of the 9 dead were UEW students; 3 others yet to be accounted for – SRC on Asuboi accident 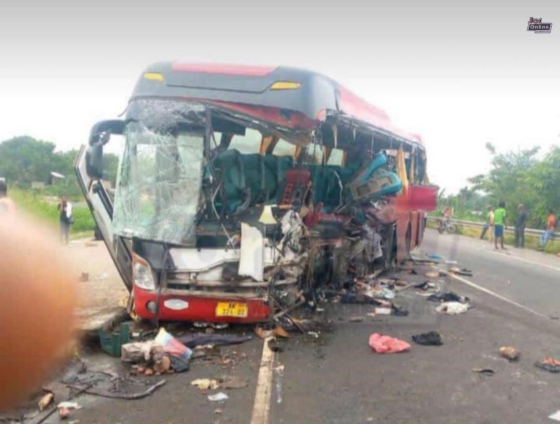 The Student Representative Council (SRC) of the University of Education, Winneba (UEW), has confirmed that five of its students were among those reported to have died in the road accident at Asuboi on Sunday.

The Council, in a statement Tuesday, revealed that the Hyundai Universe commercial bus involved in the crash had 35 registered UEW students on board together with other passengers.

According to the SRC, 22 of the students who sustained various degrees of injuries were first treated at Suhum Government Hospital and later transferred to the University Hospital for further treatment.

Meanwhile, three others are in critical condition and have been transferred to the Koforidua Regional Hospital.

However, the press release noted that three of the students are yet to be accounted for.

On Sunday, it was reported that nine UEW students had died after the bus they were travelling on from Sunyani to Accra crashed into a stationery articulated truck.

The bus driver with registration number AK324-22 is reported to have failed to observe traffic regulations because he was allegedly sleeping.

Subsequently, the Public Relations Officer of the University of Education, Winneba (UEW), said the students involved in the Asuboi accident were not on an official trip.

According to Ernest Azutiga, the school gathered that the students moved out because of the break-in academic activities.

“Most of the students had gone home, some also had gone for weekends, and because they felt that they had some numbers, they decided to organize themselves so they could get a bus that could get them to school, but it wasn’t an official trip,” he said.

He noted that the school would “contact families on what has happened for them also to take account of it and come over to see whatever support they can offer.”

The SRC, in its statement, has promised to ensure that management upholds its pledge.

“The SRC would ensure that as promised by management, all medical bills of these students are catered for,” parts of the statement read.

It also commiserated with families who lost their relatives in the accident.

“The SRC extends its condolences to the bereaved families and wish those on admission a speedy recovery. SRC encourages the students to remain calm in this trying moment,” the Council encouraged.

DISCLAIMER: The Views, Comments, Opinions, Contributions and Statements made by Readers and Contributors on this platform do not necessarily represent the views or policy of Multimedia Group Limited.
Tags:
Asuboi road accident
Student Representative Council
University of Education Winneba