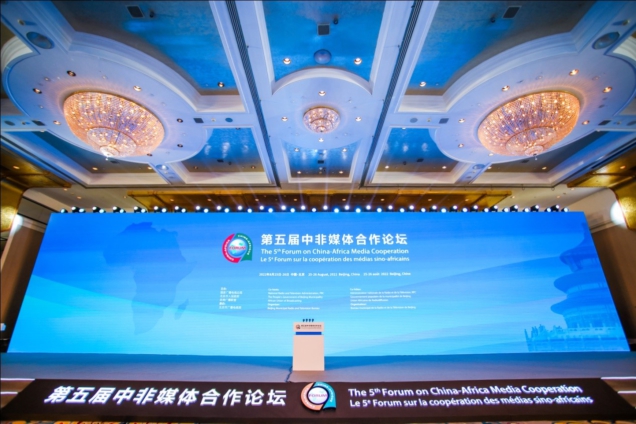 The 5th Forum on China-Africa Media Cooperation was held in Beijing in a combined online/offline mode from August 25 to 26, 2022.

The event was co-hosted by the National Radio and Television Administration of China, the People’s Government of Beijing Municipality and the African Union of Broadcasting.

More than 240 delegates from the government departments, media institutions, audio-video enterprises, diplomatic missions from China and 42 African countries, the African Union Commission and the African Union of Broadcasting attended the forum.

President Xi Jinping of China and President Macky Sall of Senegal sent congratulatory letters to this Forum, in which they spoke highly of the Forum s conducive role in advancing the dialogue and cooperation between Chinese and African media, promoting mutual learning between the civilizations, and deepening the China-Africa comprehensive strategic and cooperative partnership. The letters will provide new impetus to China-Africa media Cooperation in the new era.

This year marks the 10 anniversary of the Forum on China-Africa Media Cooperation. In deep appreciation to look back upon the fruitful results, both sides have achieved over the past decade. Government departments of both sides have established regular effective communication channels to enhance understanding of each other’s policies and ideas. Media organizations have been engaged in cooperation in news coverage and other co-productions to jointly tell stories of mutual friendship.

Translated audio-video works have been embraced by the audience, bringing the hearts of the peoples closer. The Satellite TV Project for 10,000 African Villages and the Integrated Digital Switch-over Project have been acceleratory to the development of the broadcasting sector in Africa, and a benefit to the African people.

China also carried out a series of training programs for African media professionals to share practical knowledge and strengthen personnel exchanges. Cooperations between the two sides are becoming more and more effective and expanding to greater depth and new areas, including new media and new technologies. Successful collaboration in the media field has become an integral part of the overall China-Africa cooperation, and has made vigorous contributions to the all-round development of China-Africa relations.

The media on both sides have been upholding the spirit of friendly cooperation and working continuously to safeguard fairness and justice, telling stories about China-Africa cooperation in the new era and shouldering responsibilities to advance global development, promote common values of mankind and actively create an international public opinion atmosphere of cohesive development and cooperation.

The two-day event also featured an exhibition of “A Decade of Achievements: China-Africa Media Cooperation (2012-2022).”