'A Ghana Beyond Aid is not beyond us' – Herbert Krapa - MyJoyOnline.com

‘A Ghana Beyond Aid is not beyond us’ – Herbert Krapa 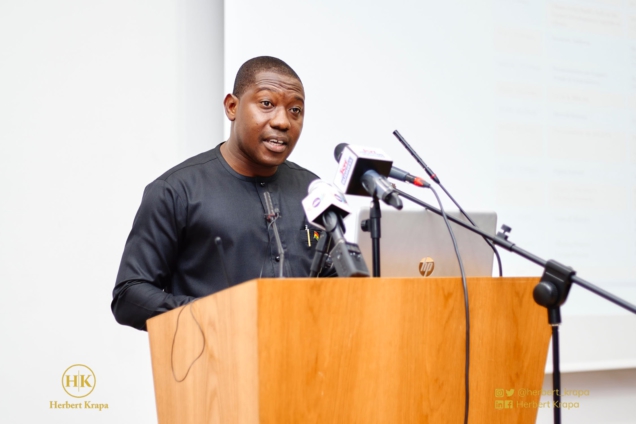 A Deputy Minister of Trade and Industry, Herbert Krapa, has called for a stronger collaboration between stakeholders in the export trade value chain to help increase the country’s exports in significant volumes.

According to him, government’s target of increasing non-traditional export revenue to $2.9 billion in 10 years through the National Export Development Strategy was key to the Industrial Transformation Agenda of President Akufo-Addo.

According to the Deputy Minister, the National Export Development Strategy will facilitate significant increase in Ghana’s export.

Speaking at a Stakeholder Consultative Forum on Export Trade and Guarantee Facilities organised by the Ghana Export-Import Bank in Accra, Mr. Krapa called on institutions such as the Ghana Export Promotion Authority, the Ghana Exim Bank, Food and Drugs Authority and the private sector to collaborate with the Ministry of Trade and Industry for the successful implementation of the National Export Development Strategy.

He observed that “building a Ghana beyond aid is not beyond us”, adding, there is the need for stakeholders to constantly enhance the productive capacity of exporters in Ghana to position them strategically to take advantage of available regional, multilateral and bilateral trade agreements.

Emphasising on the role of Ghana Export-Import Bank in this development agenda, Mr. Krapa intimated that Exim Bank is appropriately placed to provide innovative and sustainable trade finance solutions to exporters.

“Trade finance from an indigenous financial institution like yours, will help reduce the risk associated with global and regional trade, and ultimately provide the much-needed impetus for reaching our most ambitious target”, he noted.

He seized the opportunity to appreciate the remarkable contribution of the Ghana Export-Import Bank to the economic development of Ghanaian businesses over the years and urged them not to relent on their efforts.

In his remark at the programme which was under the theme “Facilitating International Trade; The Role of Exim Bank”, the Chief Executive Officer of the Ghana Export-Import Bank, Lawrence Agyinsam mentioned that the country has recorded export trade surpluses from 2017, with cocoa butter, cocoa paste, canned tuna, refined palm oil and natural rubber sheets topping the list of non-traditional exports.

According to him, the bank which was established in 2016 under Act 991 with the vision of becoming a strong financial institution that will be key engine in the development of Ghana’s export trade, facilitate cross border trade and make Ghana a pillar in the regional and continental trade, has over the last six years supported exporters in the area of pharmaceuticals, shea butter, cashew, potato, poultry, cassava, oil palm, mango, bee production and pineapple farming.

Mr. Agyinsam was optimistic that the bank’s products such as the Export Trade Facility, the Receivable Discounting Facility and the Provisional Guarantee Facility, will continue to perform its role in building Ghana’s capacity and competitiveness in the global market place.

The forum was attended by the Coordinator of the National African Continental Free Trade Area Office, Dr. Fareed Arthur; the Chief Executive Officer of the Ghana Free Zones Authority, Mike Oquaye, Chairman and Members of the Board of the Ghana Export-Import Bank and representatives of various exporters and manufacturers association.