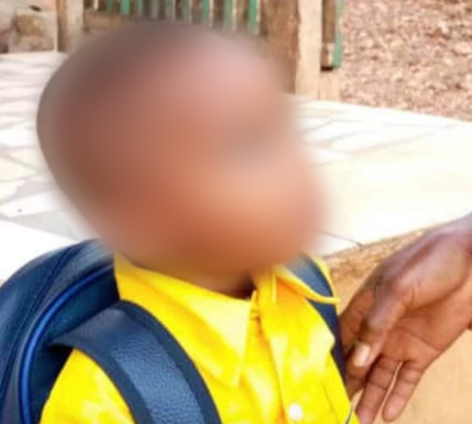 The four-year-old boy abducted by a woman while in school at Nkawkaw in the Eastern Region has been found alive at Anyinam.

He was found by a resident in Atiwa East District Tuesday evening wearing a vest and one slipper crying in front of a kiosk.

He was taken to the Anyinam Police station by Shaibu Zibiru, a resident. The boy was allegedly abducted on Monday, March 22, 2021, at about 12:30 pm in Iffradulai Preparatory School in Nkawkaw Zongo.

Police at Nkawkaw launched investigations into a case involving a woman who allegedly abducted the four-year-old identified as Muhammad Mansir.

According to reports, the unidentified woman wore a hijab, entered the school premises and pretended to have been sent by the child’s parent to pick him home.

The headmaster who became suspicious of the woman questioned her identity. He told JoyNews he became satisfied with the explanation given him and allowed her to pick the child and his four other siblings home.

Anyinam District Police Commander DSP Daniel Wiafe told Journalists Wednesday morning when the boy was found that, “the boy is physically hale and hearty but per standard operative procedure, he will be sent to the hospital for medical examination.”

The Police Commander added that “When he was found, according to Shaibu Subiru, initially the child couldn’t speak.”

“When you ask him any language the child could not respond but this morning at the station when the parents came he started talking and then any question they ask him he was able to answer them. For now, he has not been able to tell the police as to how he got to this place.”

According to him, even though the boy has been found, the police will still pursue to arrest the suspect.