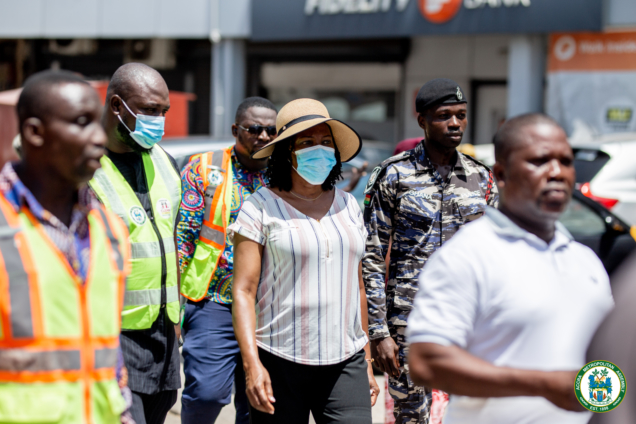 Mayor of Accra, Elizabeth Kwatsoe Tawiah Sackey on Monday paid a working visit to Gamashie, a suburb of Accra to interact with residents on the sanitation situation in the community ahead of this year’s Homowo celebrations.

The Mayor who was accompanied by officials from the Assembly and some Assembly Members used the occasion to sensitise the residents on the need to keep their surroundings and drains clean at all times to prevent the outbreak of communicable diseases as well as flooding.

She stressed on #BorlaInDrainsMustStopNow and called on women in the community to play a pivotal role in maintaining cleanliness and hygiene in their communities.

“When you see somebody throwing refuse into drains or any open space, it is your responsibility to call the person to order and report to the Assembly for action. This is our beloved country. This is our motherland”, she said.

Mrs Sackey who also interacted with some Ga traditional priests in the area solicited their support to help combat the issue of sanitation in the vicinity.

She also urged indigenes of Accra to uphold and respect their traditions, especially during the ban on drumming and noise-making as part of traditions to be observed ahead of the Homowo festival.

At the Accra Central Business District (CBD), the Mayor inspected an ongoing decongestion exercise and revealed that the AMA as part of efforts to decongest the city was wooing investors to aid in expanding the markets.

DISCLAIMER: The Views, Comments, Opinions, Contributions and Statements made by Readers and Contributors on this platform do not necessarily represent the views or policy of Multimedia Group Limited.
Tags:
Accra mayor
Elizabeth Kwatsoe Tawiah Sackey
Ga Mashie
Refuse dumping