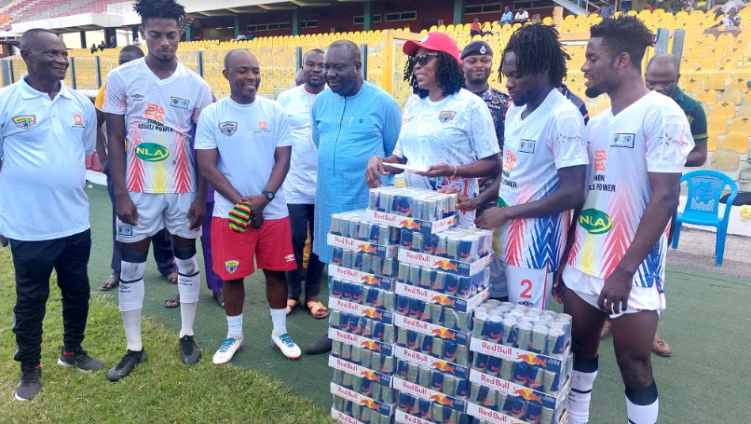 The first female Mayor of Accra, Elizabeth Kwatsoe Tawiah Sackey has donated 20 cartons of Red Bull energy drink and an undisclosed amount of money to the playing body of Accra Hearts of Oak.

The donation is to boost their morale ahead of the second-leg encounter of the Confederation of African Football (CAF) Confederation Cup against AS Real Bamako of Mali.

The Phobians who succumbed to a 3-0 defeat to the Malian side in the first leg of the second-tier competition of African club football at the Stade Modibo Keita are expected to stage a comeback at the Accra Sports Stadium and advance to the CAF Confederation’s final qualifying round.

The Mayor in an interaction with the players encouraged the players as well as the technical bench to do everything possible to throb their arch-rivals come Sunday.

“I appreciate the work you do and I am here to encourage you to do more because you never say die until the bones are rotten, so we are here to support you to win your next game, which is why we have brought these drinks and cash to motivate you,” she said.

Captain of the team, Abdul Fatawu Mohammed who received the donation on behalf of his colleagues expressed appreciation to the Accra Mayor for the gesture and promised the team would do its best to win in the return leg clash to progress to the next stage of the competition.

Present at the event was Vincent Adotei-Sowah, a Board member of Hearts of Oak, some officials from the Accra Metropolitan Assembly (AMA) as well as technical members of the team.

DISCLAIMER: The Views, Comments, Opinions, Contributions and Statements made by Readers and Contributors on this platform do not necessarily represent the views or policy of Multimedia Group Limited.
Tags:
Accra mayor
Elizabeth Kwatsoe Tawiah Sackey
Hearts of Oak