In our series of letters from African writers, Ghanaian journalist Elizabeth Ohene looks back at some of the big events on the continent in 2018.

It has been a year where one is tempted to invoke the "always something new out of Africa" theory.

It is not every day you have a prime minister leading a group of soldiers into doing press-ups, particularly not when the armed soldiers had tried to force their way into the compound of the prime minister to protest against unpaid wages.

It is the type of scenario that used to end up in coups in the old days.

But Abiy Ahmed has been doing the seemingly impossible ever since he unexpectedly became prime minister of Ethiopia in April.

He is 42-years-old, and currently Africa's youngest leader.

There is nothing predictable about the man and how he has set about doing his job.

Ethiopia had been seen by critics as an authoritarian state that brushed off criticism and remained an implacable foe to neighbour Eritrea.

But within a few months of taking office, Mr Abiy had lifted the state of emergency, released thousands of political prisoners, allowed dissidents to return home and unblocked hundreds of websites and TV channels.

Just as people were digesting the dizzying changes on the domestic front, the prime minister, in the sphere of diplomatic relations, did the equivalent of making the sun rise from the west.

He ended the state of war with Eritrea by agreeing to give up disputed border territory thereby normalising relations with the long-time foe. 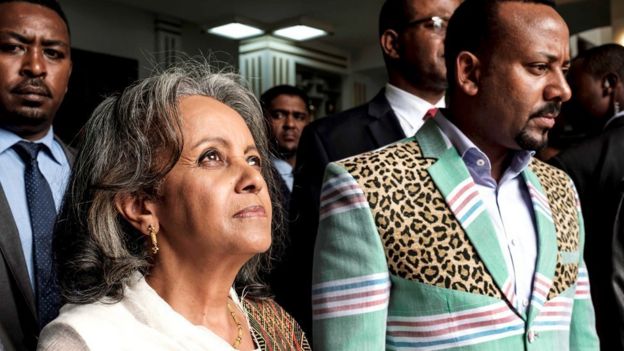 This came in an unexpected visit to the Eritrean capital, Asmara, and publicly holding hands with Eritrean President Isaias Afwerki to declare the end of the two-decade old war.

Flights and telephone communications have been restored and there has been an outbreak of love between the two nations that has stunned the world.

And if anyone thought there had been enough surprises, in October, Mr Abiy appointed women to half of all cabinet posts.

If that does not sound impressive enough, there were other changes. Ethiopia now has a female president (Sahle-Work Zewde), a female head of the Supreme Court (Meaza Ashenafi), a female head of the electoral commission (Birtukan Mideksa), and the official spokesperson of the government is a woman (Billene Aster Seyoum).

South Africa was another country which saw a major change of leadership, but the optimism that came with the accession of Cyril Ramaphosa to the presidency has fizzled out. 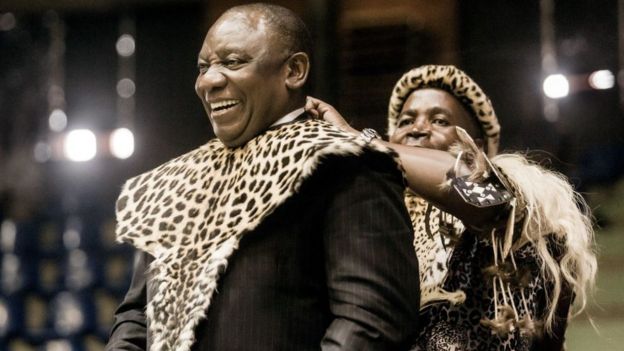 Cyril Ramaphosa is under pressure to curb corruption and unemployment

He took over after the scandal-hit President Jacob Zuma was forced to resign in February.

Mr Ramaphosa was not doing press-ups but he did start with a lot of enthusiastic jogging that attracted a lot of attention from his compatriots.

When he started the hashtag "the tummy must fall", many South Africans felt the time for smiles had returned to their country.

But the brooding shadow of Mr Zuma looms large as Mr Ramaphosa tries to tackle the alleged corruption which came to define his his predecessor's time in office.

Mr Zuma maintains his innocence, and has asked the courts to throw out 16 corruption charges brought against him over a notorious arms deal.

For a brief period this year, all 54 countries on the continent appeared united in outrage in January when US President Donald Trump was reported as not wanting migrants from Africa coming to the US because their countries were "shitholes".

Later in the year, his wife Melania undertook a four-nation African tour when she visited Ghana, Malawi, Egypt and Kenya. Whilst she was still on the continent, President Trump was tweeting that Africans loved his wife. 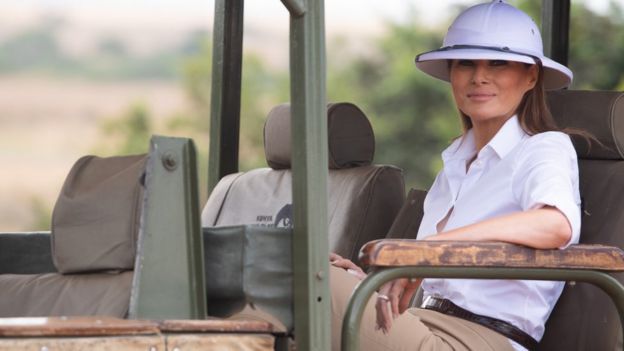 Indeed, Melania cut a swathe with her pith helmet, even though it does not seem to have started a new fashion trend yet.

Whilst some people were still debating Mr Trump's reported insult against migrants, a young man from Mali held Paris spellbound as he scrambled up the wall of a high-rise apartment block to save a dangling child.

He earned himself the title of Spiderman, and was granted French citizenship by President Emmanuel Macron.

If the Parisian Spiderman temporarily forced the French to look at migrants in a different light, President Macron himself was forced to listen to an eight-minute exposition on how Africa does not want the generosity of the world by the Ghanaian President Nana Akufo-Addo when he visited the West African state.

That video went viral and many Africans cheered that a leader had articulated their feelings.

But other things went viral which did not make too many people proud. 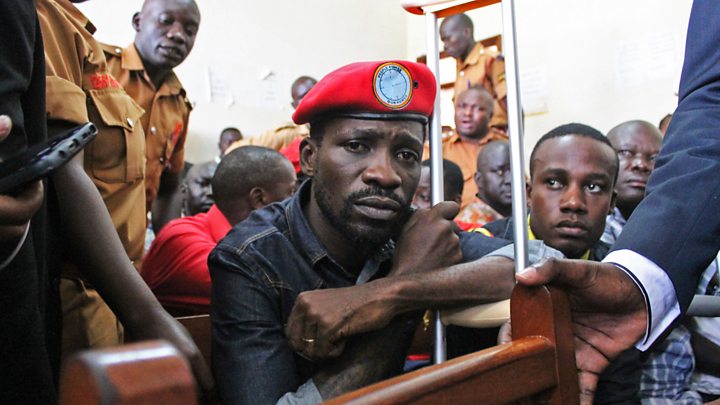 Bobi Wine, the Ugandan pop star-turned-MP, shook Uganda for a few weeks in August and attracted the attention of the world when he was arrested by the police and charged with treason.

After leaving the country for medical treatment for injuries that he alleged were sustained during his arrest, he is now back in Uganda and his first performance as a singer in November showed his popularity remained solid.

A good man was recognised for his good deeds when Denis Mukwege, the Congolese doctor, shared the 2018 Nobel Peace Prize with Yazidi activist Nadia Murad.

Dr Mukwege has been described as "the world's leading expert on repairing injuries of rape", and is known to grateful patients as "Doctor Miracle" for his work in his homeland of the Democratic Republic of Congo, where unfortunately his skills are always needed because of the continuing unrest. 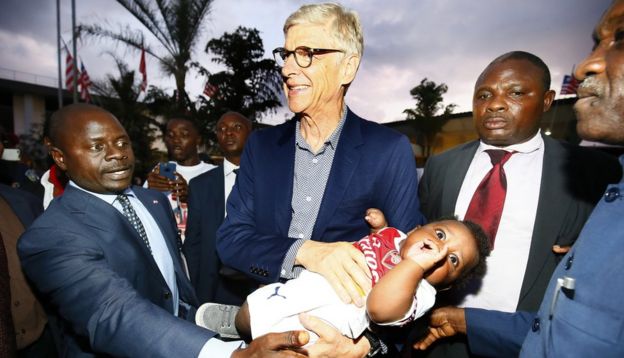 Arsene Wenger got a hero's welcome when he flew into Liberia

George Weah became president of Liberia in January and demonstrated his gratitude to those who helped him at the start of his football career as later in the year he gave his former coach, Arsene Wenger, the country's highest award.

If Nelson Mandela had been alive, he would have been 100 years old this year and to mark the anniversary of his birth, lots of activities were organised around the world.

Former US President Barack Obama went to South Africa to give a lecture and there were concerts to celebrate Madiba, as the anti-apartheid icon is affectionately known.

Hugh Masekela, the famous South African trumpet player and anti-apartheid campaigner, died earlier in the year and was widely mourned.

Winnie Madikizela-Mandela, the ex-wife of Nelson Mandela and the much-loved and sometimes controversial anti-apartheid leader, also died this year and was given a befittingly rousing send-off. 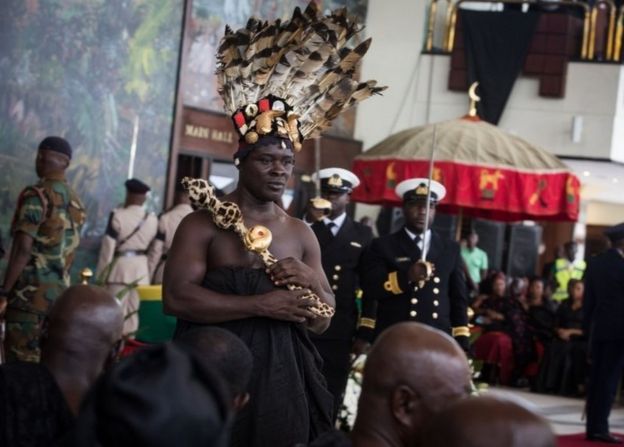 Ex-UN chief Kofi Annan was given a grand funeral in Ghana's capital, Accra

Kofi Annan, the former secretary-general of the United Nations, celebrated his 80th birthday and continued with his peacemaking activities when he led a delegation to Zimbabwe ahead of July's elections. He died unexpectedly in Bern, Switzerland, in August.

His remains were brought to his homeland of Ghana where he was given a state burial and a grand funeral in true Ghanaian style.

The love affair between China and Africa continued and at a conference in Beijing this year, President Xi Jinping announced an extra $60bn (£47bn) of financing for the continent.

Meanwhile, the Americans went public with their scepticism about China's intentions and accused China of predatory loan arrangements.

But the infrastructure deficit on the continent is huge, and the view of African governments seems to be that money should be taken from anywhere and anyone to build roads, bridges, railways, airports, schools, hospitals and universities.

Their citizens will not complain, provided they can see the results with their own eyes.