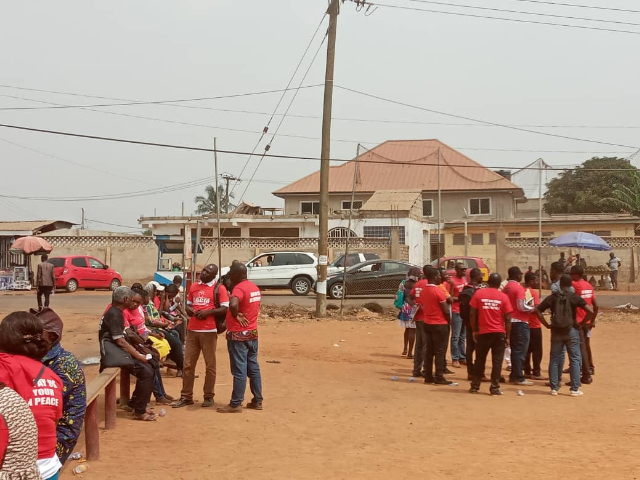 Aggrieved customers of gold dealership Menzgold say they would defy a police directive against their decision to march to the Jubilee House to present a petition to the President over their locked up funds.

This according to the group is because the scheduled meeting with President Akufo-Addo has not been cancelled.

“We have to present this because the Presidency is waiting for us. The first gentleman of this nation is waiting for us at the Jubilee House, so why do we have to sit down and say the police say it doesn’t have men to protect us, I mean this is childish talk,” leader of the group, Evans Ewudzi told JoyNews’ Komla Adom.

The police in response to their notification of Tuesday’s march said they were deploying men to combat crimes elsewhere, hence cannot provide protection for the group.

“The Command is concentrating on the fight against robbery and other violent crimes as we enter the threshold of the year and as a result cannot accept any form of demonstration, picketing or walk during this period.

“The Command also wishes to remind you that you have already demonstrated on the same subject matter in less than six months and as such would not tolerate any further demonstration as other citizens must also have their interests served by the police,” Regional Commander for the Accra Region, DCOP Frederick Adu Anim had said in his letter to the Coalition.

But the customers are calling the bluff of the police.

Mr Ewudzi told JoyNews, nothing will stop them from petitioning the Presidency over their investment.

He called for the dismissal of the regional police commander over what he describes as unfair treatment to the aggrieved citizens.

“We want to send a signal to the police hierarchy that if they can get men to come and protect the court here, why can’t we get men to protect us as we go present our petition to the president.

“They should give us a break. What is this? What kind of country are we living in? Are we from Togo or Burkina? We are Ghanaians so if they can get more than 30 policemen here and you tell me that presenting only a petition to the President alone needs about 100 police personnel at the Jubilee House then I am ashamed. He needs to be sacked,” he lamented.

Meanwhile, five of their members who were among the 92 arrested for unlawfully besieging the residence of Nana Appiah Mensah, were on January 14 granted bail by the Madina Circuit Court.

The five were charged with unlawful, forceful entry, unlawful assembly and conspiracy to commit a crime.

They pleaded not guilty to the charges.