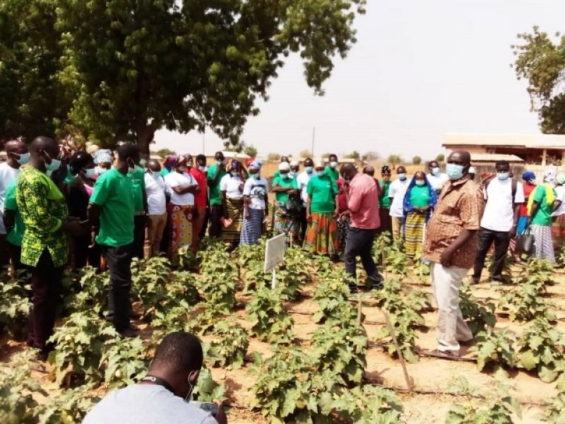 The Savannah Agriculture Research Institute of the Council for Scientific and Industrial Research (CSIR-SARI) has called on the government to establish a sustainable funding source to promote continued agriculture research that will enhance agriculture productivity.

The Acting Director made the call during an interview with the media after CSIR-SARI, Manga Station had introduced farmers from six districts which included: the Upper East Region improve technologies at its Technology Park, established with support from the Agriculture Manufacturing Group (AMG) Limited, a local fertilizer producer and distributor.

According to him, CSIR-SARI should be endowed with the necessary scientists to carry out proper research that could help reduce the challenges that Ghanaian farmers face and help increase production as well as achieve the Sustainable Development Goals.

As a research institute, he added that the CSIR-SARI was aimed at addressing farming challenges and building a resilient agriculture economy that promoted high and quality yields, contributed to food and security as well as cutting down importation while maintaining fertile land for continued production.

Dr Buah revealed that the Institute was keen on promoting the use of organic fertilizers and legumes, which reduced amount of fertilizer applied on the farm to lower greenhouse effects emission adding that it would contribute significantly to addressing climate change phenomenon.

“Funding is the greatest problem we face, government pays our salaries but to carry out any research we really have to write proposals.

“Sometimes you will go into a community and identify a problem that farmers face and yet you will be constrained with resources to undertake research that may help address the issue,” he lamented.

According to him, government needs to implement and resource adequately the proposed Science and Technology Fund to ensure that CSIR-SARI as the main agricultural research organ of the government carried out its mandated work to make agriculture attractive, profitable and resilient.

Dr Buah stated that the CSIR-SARI engaged in farmer needs and demand-driven research to address the challenges in agriculture adding that when the Science and Technology Fund was incorporated into the annual budget, the resource would be made available for its activities.

The demonstration further brought together beneficiary District Directors of the Department of Agriculture, the Agriculture Extension Agents as well as staff of CSIR-SARI.