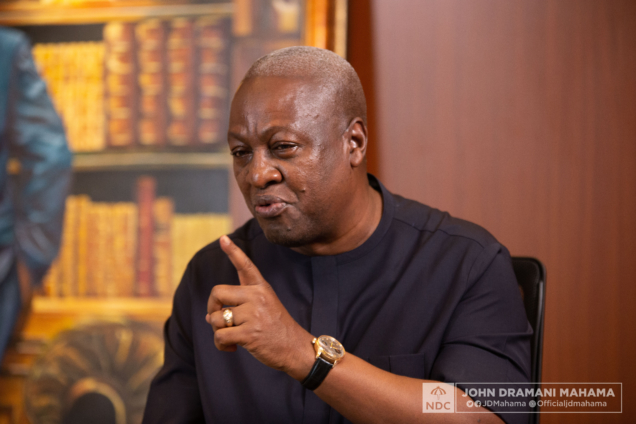 National Democratic Congress (NDC) flagbearer, John Dramani Mahama says the legacy of the Akufo-Addo led government will be the bastardisation and politicisation of state institutions.

According to him, the President during his tenure in office has set back democracy in such a manner that the state institutions are heavily politicized while open debates are stifled.

Speaking in an interview broadcast live from Kete Krachi via Facebook, the former president bemoaned several actions of the president he believed were undermining democracy.

“The judiciary now has been packed with judges selected by this president and so people, I mean if you speak with anybody, they don’t believe that you can get justice from this judiciary.

“At parliament, you remember there was a state of the nation address where the minority were singing ‘and help us to resist oppressors rule’ that was what I was referring to. They feel oppressed,” he said.

He added that “Parliament is a platform for the people’s representatives to speak out, but if you have a speaker who rather than promoting open debate tries to curtail it; then you have an oppressed parliament.”

He also bemoaned the ‘intimidation’ of the media stating the closure of XYZ and Radio Gold.

“So I talked about the media; an intimidated media. A lot of radio stations are afraid to carry programmes that are critical of government because they fear the fate that confronted XYZ and Gold would be unleashed on them. And the NCA keeps threatening them and so the media isn’t as free as it was before.” He said.

He stated that should these important institutions of the state be flooded by political pawns, and those who dare to criticize the government be bastardised, Ghana’s democracy would be in shambles.

“What I’m saying is that the tragedy of four years of Akufo-Addo is in the bastardisaton and politicization of the institutions. These are the institutions that our democracy stands, and if they cannot do their work impartially then there is a problem,” he lamented.