Saint Denis, PARIS – On this field Les Bleus had won the 1998 World Cup. And on the same home soil they had carved a formiddable record of not losing in their previous 18 major-tournament matches. They could have been forgiven the fact that they felt the trophy was theirs for the taking.

As Hervé Penot of L'Équipe told me, "After the semifinal the feeling may have been that this final should have been a little bit easier".

France possess arguably the most talented set of individuals in any one team at these European championships, but the way they have won some of their games in the run to Sunday's game suggested a slight lack of toughness.

Even when they beat Germany in the semis, it could be said to have been more down to how the world champions made two costly errors (from Bastian Schweinsteiger and then Manuel Neuer) than how France fashioned something out.

And with these facts, Portugal's technical team armed their players ahead of the final. The notion of the home side's 12th man was banished from the start, with emphasis on what to do to disrupt Didier Deschamps' ideas.

This siege mentality template – studying the opponent and disrupting their rhythm – is how Portugal have played all tournament long. They've seemed functional rather than spectacular.

But at the top of their preparation has been a manager bent on exorcising every insecurity the world has thrown at his players – lack of cohesiveness, a pre-tournament injury list that would have broken many other managers, and a side with a colourful personality spectrum.

Fernando Santos, like Vicente Del Bosque before him, won the European championship knowing that all the tactical knowledge in the world makes no sense if a coach cannot be a father figure who works with what he has.

It's true that since he took over from Paulo Bento in September 2014, Santos has been unbeaten in 14 competitive games and that may lead to a temptation to focus on the tactics alone.

“Two years ago we set the target to get here,” he said before the game at the Stade de France. “We told each other that we had to do our utmost to get to France and reach this final. We have worked like crazy to get here. Now we have a final to play and you know that a final is not played, it is won.”

ALL IN THE MIND

While the rest of the world focused on extremes of his team and players, he has focused on shoring their strengths and making them tick.

When, before the final, Ricardo Quaresma turned up from a French salon in an outrageous hairdo, journalists thought the 64 year old coach would have choice words for the player with such a definitive history of a lack of focus. Instead, Santos said: "It's just amazing and I congratulated him when I saw it. It's a work of art".

Six days ago by this time, 18-year old Renato Sanches' mental acuity was under threat following renewed reports about his age. A section of the media could not believe his prodigious talent was real; they accused the newly acquired Bayern midfielder of age-cheating. 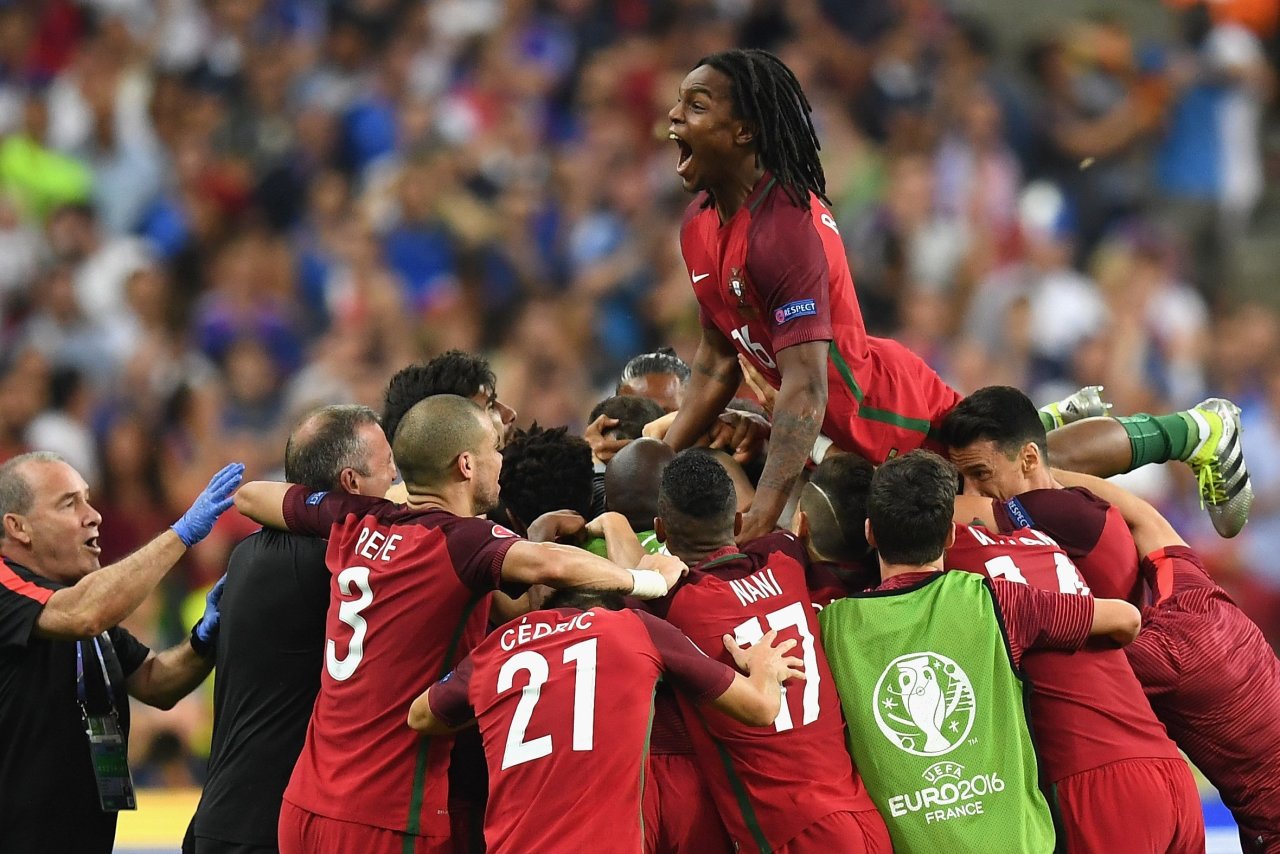 Santos is said to have called the player after bedtime, assuring him of how special his talent is and why it was important to look forward rather than backward. For good measure, Santos has given Sanches two starts, allwoing the youngster to break longstanding records held by Cristiano Ronaldo in the process. Renato has repaid the faith with beastly performances

But most impressive of all has been the coach's management of the team's superstar. Former national team talisman Luis Figo put it best, saying this week: "With Cristiano you either get it very right or very wrong. I don't know what Fernando is doing to keep the balance in [the dressing room], because it is clear Ronaldo is being given a lot of special treatment. Somehow, the other players don't seem to mind".

Getting to the end of the final, the cameras continuously focused on Ronaldo, having been earlier subbed off due to an injury after just 24 minutes, standing side by side with Santos and issuing instructions. Meanwhile, the Selecao's assistant coaches sat unconcerned.

Such accomodation and management deserves the highest praise. A man of few words, Santos is known to be candid when he wants to be. But after bagging his country's first major international trophy, the former – coach summed his style with a terrific quote. "We were as simple as doves, and wise as serpents. I thank them all".

The real man to thank is he, Santos himself.

A BAND OF NEARLY MEN

History will inevitably zoom its lenses to the obvious stories: how Ronaldo powered Portugal with his charisma, team talks (he have his colleagues a motivational barrage at halftime during the final, according to Cedric Soares), and huge personality; the debate on how Portugal did or did not deserve this win because they got the luck of the draw and even, perhaps, how this trophy ensured Ronaldo surpassed Messi in cementing his places as the best of this era.

What history may leave as an afterthought is how Santos turned a band of nearly men into a gritty, mentally-hardened set of European champions.

Nani. A man stuck in the shadow of his supreme talent for a long, long time. In 2010, he admitted a ceratin pressure that weighed him down, "I grew up with 14 brothers and sisters who always want me to lead the way. At Manchester United I could not put several games of top performances together because I felt this pressure." Santos' decision to pair him with Ronaldo as Portugal's outright strikers, trusting in his usually erratic ability has paid off.

Quaresma. Like Nani, long imprisoned in Ronldo's shadow. And then in the shadow of his indiscipline. Last season he helped Besiktas to a second title in his second spell at the club, after years of patchy showings across five teams, inlcuding in the Gulf. This was the player who, in 2008, won the unofficial Bidone d'oro (Golden Bin) for worst footballer in Italy. Quaresma, now 32, is also known for his sizeable ego, which is why it's been interesting to note how Santos convinced the former Barca man to be an impact sub these past few weeks.

As for Eder, it's been a surreal year for him. You would not find three people alive – perhaps maybe apart from his parents and Fernando Santos himself – who could have told you that it would be this man who would score the most important goal in Portuguese football history.

This guy, who spent seven average seasons with Académica and then Braga. This guy, whose ‎£4m move to Swansea was so odd a popular local journalist, Vitor Hugo Alvarenga, asked: "Did he use some voodoo to persuade the English?".

Eder had scored just once in 23 Portuguese caps before the Euros, but Santos completely ignored calls to drop the 28 year old and imbued him with self belief. And here we are.

After Sunday's final, Santos said, "When [Eder] came on [as a sub for Renato Sanches] he told me he would score. The ugly duckling went and scored. Now he's a beautiful swan.” The story of how Portugal have won this tournament looks suspiciously like Greece of 2004. The popular word used for Ronaldo and Co. has been 'boring'. A bit of history may explain the similarity.

Santos actually inherited the Euro 2004 winning side and – just as he's done with this team – went unbeaten for 17 games using an extremely familiar style – play to have fun, but follow the rules and know the boundaries. That Greek side, as is widely known, was hard to beat, and they hardly threw men forward.

Such previous experience has made the coach very confident in his methods, which may explain what now seemed to be blessed insight at the last press conference before Portugal left for France five weeks ago.

“I’m not going home until after July 11, and I’m not talking about holidays,” he said with a smile, while the assembled press laughed. Guess who's laughing now?

In leading Portugal to become the 10th different nation to win the European Championships, Santos has not just brought a family atmosphere into the Selecao camp, but there's finally a quality not seeen in there for a long time: psychological stability through an identity.

With a good number of the team so young – eight members of the squad are under 24 – and an experienced spine ready to pass on lessons – a further eight are 30 or above – the future of the Selecao does not look half bad. Especially with the former engineer, former Benfica, Sporting Lisbon and Porto coach, in charge.

Euro 2016 – Fan reaction in Paris. Joy Sports speaks to fans here to witness the games from around the world.

Gary Al-Smith is assisting Joy Sports editor. The Joy Sports coverage of the Euros has been sponsored by Pepsi and DStv.