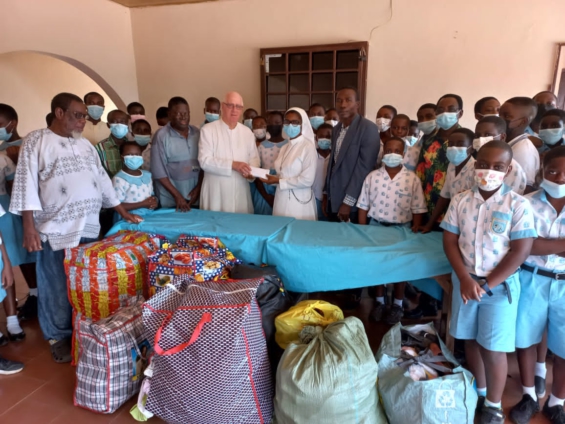 Pupils of the Ancilla Basic School at Haatso in Accra have presented a cash donation and assorted items to the inmates of the Weija Leprosarium in Accra.

The cash donation, which amounted to Gh¢8,000 and packs of second-hand clothes and shoes was motivated by the school’s corporate social responsibilities.

Assistant Headmistress of the school, Rev. Sister Paula Bangliebo, who presented the items on behalf of the pupils, said the gesture was to support the inmates of the Leprosarium to meet some of their basic needs.

She said the donation also formed part of an annual tradition of the school where individual students make personal contributions – in cash and kind – to support the needy in society in commemoration of the Lent Season.

She added that at the end of the grace-filled season, the class that comes first with the highest cash contribution towards the yearly charity project is nominated to represent the school during the main donation exercise.

“The Lent Season is a period of fasting, prayer and almsgiving,” Rev, Sister Bangliebo said. “In doing so, we are trying to instill the spirit of love and the habit of giving into these pupils who are the future leaders of the country.”

Head of the Weija Leprosarium and a retired Parish Priest of the Christ the King Parish, Rev. Fr. Andrew Campbell, thanked the pupils for the kind gesture. He said the donation would go a long way to support the financial needs of the facility.

Rev. Fr. Campbell noted that the Centre is currently confronted with huge financial challenges as inmates are compelled to survive on the government’s monthly stipend of thirty cedis (Gh¢30) per person through its Livelihood Empowerment Against Poverty (LEAP) programme.

For him, this was woefully inadequate and has appealed to benevolent individuals and organisations to come to the aid of the centre.

Earlier in the week, the school in a similar gesture also made a cash donation of GH¢3,000 to support the medical bills of a needy student at the St. Mark Catholic Church at the Ashongman in Accra.

DISCLAIMER: The Views, Comments, Opinions, Contributions and Statements made by Readers and Contributors on this platform do not necessarily represent the views or policy of Multimedia Group Limited.
Tags:
Ancilla School
Haatso
Weija Leprosarium