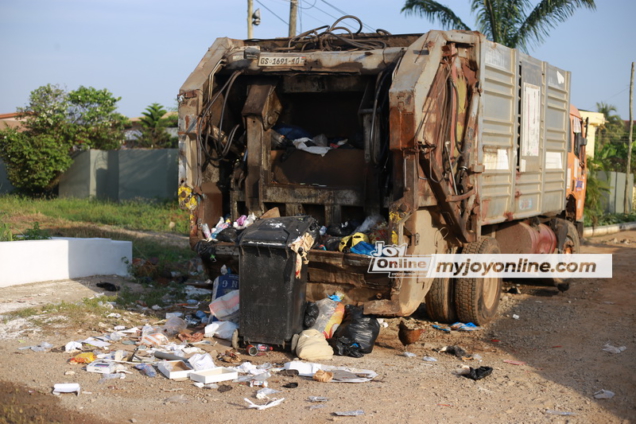 Some residents of Haatso in the Ga East Municipality of the Greater Accra Region say they cannot stand the stench from an abandoned broken down waste truck in their neighborhood.

The waste lift vehicle has been there for the past 2 weeks with refuse scattered around while an offensive smell emanates from the truck. This has worsened the situation.

The vehicle with registration number GS 1691-10, belongs to Honest Waste Services but has been left unattended. The situation has been a big challenge for residents as it could erupt into an epidemic.

According to residents, the incident has attracted scavengers who scavenge through the waste, thus creating a mess in the area.

In an interview, Ms Adiza Braimah, a resident shared her ordeal with myjoyonline.com. Adiza said she has tried to get in touch with the waste management company but her effort proved futile.

She disclosed that she organized some neighbors to clean the overflowing refuse to minimize the stench.

They also hired tricycles to cart the refuse away as the stench kept affecting everybody, including passersby who kept complaining.

Another resident who prefers to remain anonymous, also complained that the stench has attracted houseflies.

She further revealed that some people have also taken an undue advantage to dump more refuse into the broken down truck.

In an interview with Myjoyonline.com, the manager of Honest Waste Services, Mr Wilson Awatey, said they had to abandon the truck because of a broken crank shaft.

He promised to remove the truck and clean the place.

DISCLAIMER: The Views, Comments, Opinions, Contributions and Statements made by Readers and Contributors on this platform do not necessarily represent the views or policy of Multimedia Group Limited.
Tags:
Accra
Ga East
Haatso