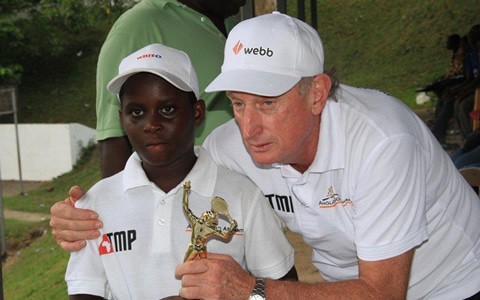 More than 300 school children from the Obuasi municipality, between the ages of 8 and 15, took part in the annual Peter Anderton Junior Tennis Tournament.

The competition was held at the AGA Obuasi Sports Club on Saturday.
The tournament, initiated by Peter Anderton, Senior Vice President, AGA Ghana is the second since its inception and was sponsored by Webb Construction, WHBO, TMP and some individuals from Australia.

Dr. Kwasi Sarfo and Ahmed Amir, tournament executives, commended Mr. Anderton for his kind gesture and pledged that the assistance given in support of the tournament would be used to promote junior tennis programmes in the municipality.

They also thanked the other sponsors, calling on individuals and companies operating in the municipality to emulate the example set by the tournament sponsors.

While thanking the competition sponsors for their contributions, Mr. Anderton explained that, “the idea behind the tournament is to train and develop school children in the communities so that they can be world class sportsmen and women in the future. Training schoolchildren will enable them to develop their potential and contribute to sporting achievements in Ghana and internationally.”

Impressed by the levels of participation and dedication of the participants, Mr. Anderton urged the schoolchildren to take their studies seriously.

The tournament sponsors expressed their intent to continue their support for the school children. Prizes were donated to individuals who excelled in the tournament. Paa Kwesi Kwenin, of Holy Child School, was judged the best tennis player in the municipality.