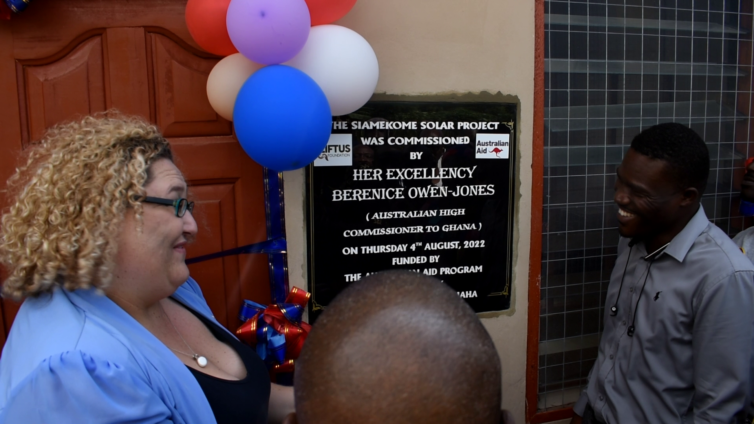 The Australia High Commission and Lift Us Foundation, through a partnership, have provided a solar system for the Siamekome Island Community in the Central Tongu District of the Volta Region.

The lack of electricity had been one of the barriers hampering socio-economic development and the education of pupils on the Island.

This feat would contribute to helping Ghana attain Sustainable Development Goals 4 and 7.

The Siamekome community is located on an island in the Central Tongu District of the Volta Region.

Due to its location, it has been difficult to extend the national grid to serve the inhabitants.

This has taken a toll on the livelihood of these poor rural dwellers.

The residents who survive on farming, fishing, shrimp and clam mining have to travel to Adidome to access health, charge their mobile phones and other gadgets.

Children in the community are not only faced with the daunting task of crossing the Volta River to Adidome to access education but have to study with phone and torch lights, in the evening.

The lack of electricity crippled the socioeconomic development of the community and affected the education of the children.

However, Lift Us Foundation stepped in to resolve the challenge.

Through its initiative, the Australian Aid provided 30,000 Australian dollars through its Direct Aid Programme, to sponsor the construction of a solar system for the community.

The 15kilowats solar system powers streetlights situated at vantage points in the community. Charging points have also been made available.

The Second Secretary at the Australian High Commission, Harriet Williams, said the Direct Aid Programme focuses on the promotion of women’s economic empowerment and gender equality.

“With access to electricity, the women in this fishing community will be able to have access to refrigeration facilities to store their fish and other perishable foodstuffs for household consumption as well as for sale”, she said.

She detailed that the facility would also serve as a resource centre to provide infants with early childhood education to prevent them from embarking on hazardous journeys across the river to school.

“As governments around the world continue to deal with the massive threats of climate change across the globe, it is heart-warming that through this solar project, Siamekome is contributing in a significant way to helping reduce greenhouse gas emissions.

Additionally, the multi-purpose facility for storage of the solar batteries, will also serve as a resource centre which will among other things serve as an early childhood education centre for young children, who would otherwise be forced to accompany their older siblings on the hazardous journey across the river to school”, Harriet Williams added.

The Director of Lift Us Foundation, Fred Duhoe, lauded the efforts of the Australian High Commission to outwit a major stumbling block to the development of the island community and its inhabitants.

“This is a great achievement, and seeing this happen today, it only means that we have contributed our quota to support the government in achieving access to education as the children also ensure that they study and make use of it to learn in the evening to achieve their results”, he detailed.

He, however, appealed to the relevant institutions to rethink the procedures, bureaucracies and cost of registering and establishing non-governmental organisations in Ghana.

“I think certain costs that are associated with the establishment of NGOs in this country have to be looked at again”, he said.

The Dufia of Mafi Adidome, Torgbe Kwasinyi Kakaklolo Agyeman V, appreciated the provision of lights to the Siamekome community and plans to provide a storage facility for the fisherfolks to preserve their daily catch.

He further indicated that “this I believe would aid the businesses of our mothers and sisters who sell fish and the fishermen. This should improve their economic status.”

Children in the community would no longer have to strain their eyes when studying in the evening with torch and phone lights.

The Siamekome community now has the electricity for residents to at least charge their phones and ensure pupils have light to aid their study in the evening.

The residents believe this would propel the development of their community.