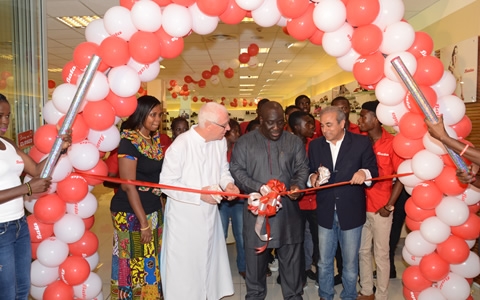 Bata, a leading footwear retailer and manufacturer has opened its biggest retail outlet at the Oxford Street Mall, Osu.

This follows a successful launch of business in August, 2011 in Ghana.

Managing Director of Padua Collections, the franchise owner of Bata, Caroline Ochieng noted at a media launch on Valentine's Day that the footwear outfit has been doing well since its launch three years ago in the country.

She said Bata's success story is the same in outlets across Africa and other four continents.

“Bata’s strength lies in its worldwide footprint, serving over one million customers per day, employing over 40,000 people, operating 5,000 retail stores and managing a retail presence in over 50 countries with 33 production facilities across 22 countries. No one in the World knows shoes like we do”, Mrs. Ochieng added.

Director of Bata responsible for new markets in Africa, Nasir Rafiq also revealed that, "the franchise’s strategic intent is to open more than 15 outlets in Ghana by the year 2016”.

In Ghana, Bata has 3 outlets in Accra and plans to open another three by the end of this year.

Among dignitaries who graced the colourful launch included: Rev. Father Campbell, the Parish Priest of Christ the King Church; Mr. Isaac Emmil Osei Bonsu Jnr, a seasoned Legal Practitioner and other executives from corporate bodies and the media.