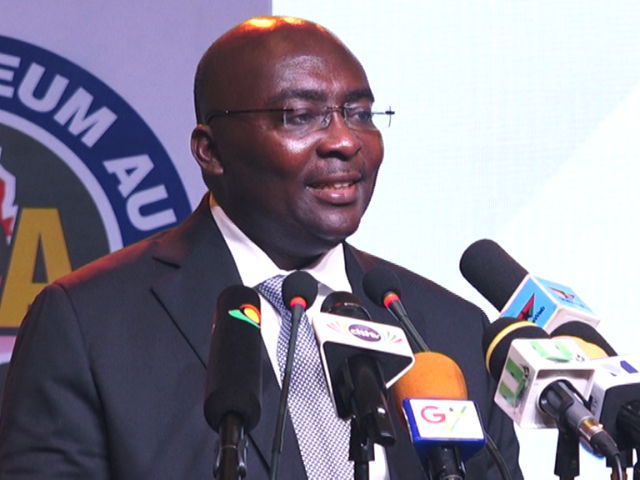 According to Dr Bawumia, there is the need for such an action to reduce petrol prices and subsequently transport fares in the country.

Government’s move to deregulate the petroleum sector is said to allow petroleum importers and marketers reduce their prices as well as boost competitions among players in the private sector.

Speaking at the 2nd edition of the Ghana International Petroleum Conference in Accra, the Vice President argued he “would encourage BDC’s to consider consolidating their businesses instead of going solo and to be able to list on the Ghana Stock Exchange to raise the needed capital to grow.”

Dr Bawumia believes “it is time for the petroleum service providers to develop their capacity to compete favourably with multinational companies and become multinationals in their business.”

There are 30 licensed Bulk Oil Distribution Companies (BDCs) in Ghana with seven of them documented to be controlling 70.6 per cent of business with the other 23 controlling just 30 per cent of the market share.

It is for this reason that most of these BDCs have never considered moves to merge. This trend, the vice president believes must be done with.

He said, “Mergers should not be seen as a loss of property but rather a strategy to enhance growth and competitiveness in the industry.”

Meanwhile, the Energy Minister, Boakye Agyarko says government's focus on the energy sector is about exploring ready avenues to making the country a petroleum hub.

Addressing captains of industry in the oil and gas industry, Boakye Agyarko says the establishment of a petroleum hub in the next decade will complement the policy direction by the government to have a new growth pole in the oil and gas sector.

“Government is ready to realise the vision of becoming a petroleum hub. The numerous policies and projects with the high rate of investor confidence is enough proof that we are getting there,” he said.