Beating retreat: British hymn 'Abide with Me' causing a stir in India - MyJoyOnline.com

Beating retreat: British hymn ‘Abide with Me’ causing a stir in India 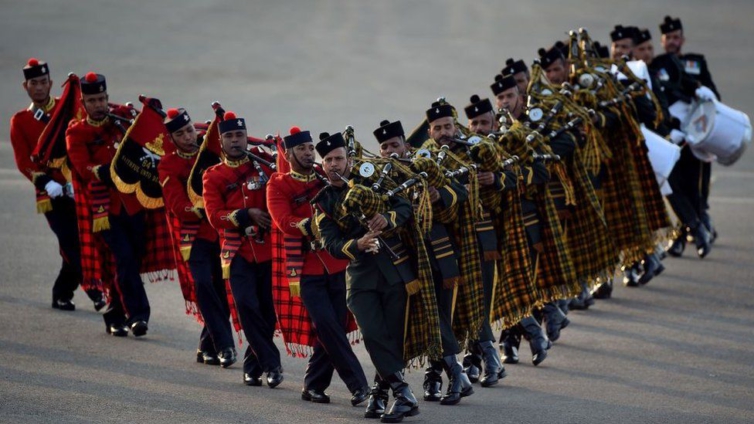 The hymn is played during Beating Retreat, a military ceremony

A Scottish hymn, said to be Mahatma Gandhi’s favourite, has been dropped from India’s annual Republic Day celebrations, as part of what the government says is an “ongoing process of decolonising India”.

The decision to stop playing the Christian hymn Abide with Me at the Beating Retreat ceremony, which honours the country’s armed forces, has divided opinion in the country.

Every year, India puts on a grand parade in the capital, Delhi, on 26 January to mark the day in 1950 when it officially became a sovereign republic. The Beating Retreat ceremony, which originates from a 17 Century British tradition, happens three days later, signalling the end of festivities.

A military source told the BBC that the song will be removed from this year’s event to make way for a playlist of Indian tunes. It’s being replaced by a popular patriotic Hindi song – Aye Mere Watan Ke Logon – which commemorates Indian soldiers who died in the 1962 war against China.

“This song is more connected to the mass population because it honours all those who laid down their lives. It’s more appropriate,” the military spokesperson said.

But others disagree, saying Abide with Me, which has been a part of India’s Republic day commemorations since the 1950s, should remain.

The debate around the decision has played out on news channels and across social media, reigniting passions over India’s complex relationship with the legacy of the British empire.

For many Indian veterans, Abide with Me – a hymn written in 1847 by Henry Francis Lyte – is the defining point of the occasion.

“Cutting it out seems like cutting out a piece of tradition and throwing it into the dustbin,” Pavan Nair, a retired army colonel who served for 30 years, told the BBC.

Col Nair remembers watching the ceremony as a child and in later years attending in person.

“The highlight of it was listening to Abide with Me and hearing the chimes from the ramparts. It was a beautiful, soulful thing.”

This year’s celebrations coincide with the 75th anniversary of India’s independence from British rule.

“There is really no reason why, after 75 years of independence, we should still have our military bands playing tunes that were introduced by the British,” Kanchan Gupta, senior adviser for the information and broadcasting ministry, said.

The change, he added, was part of an “ongoing process of decolonising India… no tradition is free of change or evolution”.

But others argue that the song’s association with independence icon Mahatma Gandhi is precisely why it should remain.

“The words are universal, the tune human,” Gandhi’s grandson, Gopalkrishna Gandhi, wrote in a newspaper, in defence of the hymn.

“I do not believe the authorities can be so impervious to the song’s aesthetic, spiritual and human appeal, so insensitive too to the feelings of those who love the hymn. Gandhi loved it.”

Manmohan Bahadur, a retired vice-marshal agrees that the connection with Gandhi is a reason to hold onto the colonial-era tune.

“Things have happened – we need to learn from them, keep the good things, jettison the not-so-good things and move forward. I see no significance in dropping something which is connected to the father of the freedom struggle.”

But others feel the debate about the song is a “massive exaggeration”.

“I honestly did not know anything about ‘Abide by me’ till a day back,” Pratyasha Rath who writes for right-wing magazine Swarajya wrote on Twitter.

“The intolerance of the BJP government has reached such proportions that there are no words to condemn their attitude and outrageous actions,” he wrote.

It’s a belief echoed by Col Nair who argued that the exclusion of the hymn would offend the millions of Christians in India.

“If you impose one kind of Indianisation, a Hindu Indianisation, then it risks upsetting other minorities. These might seem like little things, but they add up at the end of the day.”

But Mr Gupta denies this accusation.

“It’s not that a Christian hymn has been removed and a Hindu hymn has been put there instead, where is the intolerance?” he asks.

For him, this is all about a “new India breaking free” from the legacy of empire – and this, he says, is happening the world over.

“This is also happening in Britain where statues are being pulled down because people will not accept that kind of a past. In America, you have statues of confederate leaders being pulled down. Is that also intolerance?”

For some Indians, the removal of the hymn will go unnoticed – but for others, Saturday’s Beating Retreat ceremony will feel devoid of a tradition that has come to define it.

“If you want to bring in something new, please do it. But don’t cut this out,” pleaded Col Nair.

“It’s a beautiful piece of music.”