Black Maidens off to a winning start in World Cup 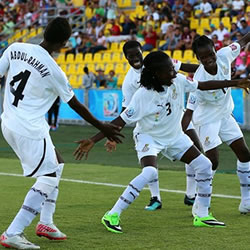 Ghana got off their U-17 World Cup campaign off to a winning start as the Black Maidens defeated Korea DPR 2-0 in the Group B opener on Saturday in Costa Rica.

A Jane Ayieyam first half goal and a second after the break by Sandra Owusu-Ansah sealed victory in Liberia as Augustine Adotey's side jump to the summit of the four-team table.

It was a perfect start for Adotey, whose team return to action on Tuesday against Germany at the Estadio Edgardo Baltodano Stadium.

Ghana, bronze medalist at the last competition started off strongly against the 2012 runners-up but could not find the net as their best effort in the early minutes was a cross by Lily Niber-Lawrence that flew across the face of goal with no one to tap in.

The Koreans also stringed a couple of passes and showed Ghana how dangerous they could be on the ball.

However, Ayieyam put Ghana in front when she she controlled a ball in the box and slipped it under the diving arms of Korea's goalkeeper Kim Myong Sun in the 17th minute.

Korea caused Ghana some problems when Berlinda Anane cleared off the line with Azume Adams beaten. Ghana held onto their slim lead to end the half 1-nil up.

Both sides returned from the break and it was the Koreans who pushed for the equaliser.

But eight minutes into the restart, Ghana doubled their lead when Owusu-Ansah took advantage of a defender 's indecision to round the goalkeeper and plant the ball into the empty goal.

The Ghana bench made two changes, bringing on Princella Adubea and Vinoria Kuzagbe for Owusu-Ansah and Laadi Issaka.

Two-nil up and the Black Maidens kept it tight though Korea still threatened as they missed two glaring chances that could have changed the game.