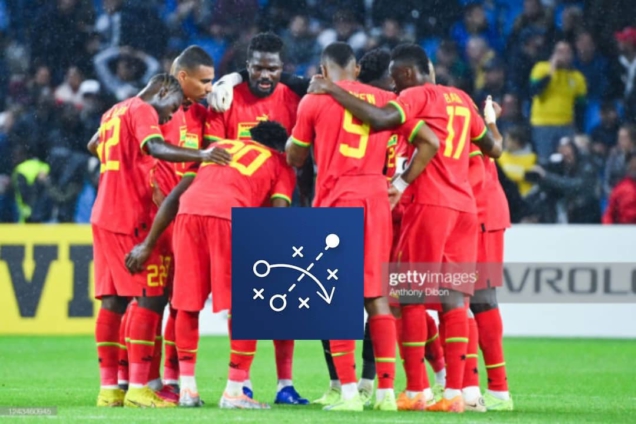 Ghana’s 2022 World Cup campaign kicks off in some style, facing off with 2016 Euro champions, Portugal, at Stadium 974.

Africa’s campaign this year has started in sour fashion. None of Senegal, Tunisia or Morocco – top-rated African sides – have won their opening games in the tournament; one defeat and two draws has been the story so far.

A story which also features a clean slate for Africa’s attackers who have played so far, and this is a trend Otto Addo and the Black Stars will need to break if they want to get their campaign off on a good note.

But up against a Portuguese side which brews quality, boasting of a very imposing forward line – a controversy-wrapped Ronaldo – exactly how do the Black Stars navigate themselves to an historic win?

“We have one aim – to win, which will be very, very difficult.” Otto Addo could not get it more right in his pre-match press conference. But as he and his assistants will already know, despite their talent, Portugal’s style affords the Black Stars some room to benefit on November 24.

But to understand where the Black Stars can flourish, there is the need to understand how Portugal play, and their approach can be divided into three basic segments; buildup, attack and defence.

In this new shape, there was a dual pivot in midfield flanked by two fullbacks. Ahead of them was a frontline of three, but in between them and the four, was a midfielder or forward given a free role.

However, in some situations, they can alternate to a more classic 3-4-3 in build up, with one of the midfield pivots dropping into defense, and the free role midfielder dropping into the pivot. And though they are able to play through opposition, they are not afraid to mix it up by going long.

Portugal were pipped to top spot in their group by Serbia, and as a result could not gain automatic qualification to the World Cup. They only qualified to the World Cup after beating Turkey and North Macedonia in the playoffs – in March.

As a result, it can be argued Santos’ men will have developed a new approach but in their final pre-World Cup friendly with Nigeria only a week ago – that was far from the case.

Nonetheless, the roles in the 2-4-1-3 shape were not fixed; with Diogo Dalot, who played right back, taking positions as one of Portugal’s front 3 in the shape, while a midfielder played in his RB role. Also, the buildup shape sometimes adjusted to a 2-5-3; two midfielders flanking a single pivot.

When the Portuguese advance into the final third, they maintain the 2-4-1-3 shape, with the free role player dropping deep to pick the ball and link play. In other scenarios, one of the three in the attacking line drops into midfield as they seek to progress the ball.

Most often than not, when the extra man in midfield receives the ball, he looks to play out to the right where Portugal will have an advantage with the numbers. Bruno Fernandes’ opening goal in the friendly with Nigeria came from the same sequence.

Meanwhile, the overload of the right-wing is mostly an ideal situation for the Portuguese in their attacking approach.

In their World Cup qualifying run, the Portuguese scored 22 goals in total, with 9 of them directly coming from the right-hand side, and three coming indirectly from the right, via winning a penalty and press.

The overload of the right-hand side often happens with a winger hugging the touchline, a midfielder playing through the right-half space and another forward making an underlapping dart into the 18-yard box.

As a result of the desire to overload the right, during build-up and their attacking phase, the three front men of Portugal shift inward; the left-sided forward vacating his position on the left. As a result, this leaves Portugal with a slight imbalance as the left-back is now responsible for width from the left. However, he receives support from the left-sided midfielder, leaving them with the tendency to be potent from the left as well.

Four of their World Cup qualifying goals came directly from the left, while three were indirect via counterattacks and corners.

In the friendly with Nigeria, Portugal adopted a more expansive and balanced approach, and ended up scoring three of their four goals from the left-hand side – 2 directly and one indirectly via winning a penalty.

In their press, either of Portugal’s wingers step up to initiate dependent on the ball’s position, while the striker does a job on the opposite defender.

But deep into their half, they seem to play in a back line of 5 as the ball-sided winger drops to help out his fullback.

How can Ghana benefit?

Portugal’s approach play with players dropping from their forward lines to link play, and their obsession with creating from wide means the Black Stars might need to start in a back 3.

Starting with a back 3 affords the Black Stars the opportunity to have one central defender follow a forward into midfield in order to prevent him from receiving the ball in space. Also, the back 3 will afford Ghana the opportunity to play with wingbacks who can defend aggressively by stepping out to Portugal’s fullbacks, while also providing security in the wide areas against Portugal’s attempts to crowd out those areas.

Meanwhile, stepping out is a trait Portugal’s fullbacks tend to show. But without the extra body of a third centre-back, it means they create gaps in their defence.

In moments where the entire backline shifts to account for that gap created, on the other wing. Moreover, their defensive shape of a 4-1-4-1, leaves a lot of central spaces which can be exploited when Portugal’s centre-backs are either slow to step out or fail to do so.

A midfield of Partey-Salis-Kyereh, with Kudus playing off a forward can provide a platform for the Black Stars to exploit those spaces, as exhibited by Serbia. The Serbs beat Portugal with a midfield of Sergej Milinkovic-Savic-Gudelj-Lukis, and Tadic playing off Dusan Vlahovic.

In many moments, Savic and Tadic were able to pitch in the pockets of those half spaces, and combine with Vlahovic to cause havoc.

Basically, these spaces Portugal tend to leave in between their lines, as well as the space their full backs create on either flank by stepping out of the defensive line, are windows of opportunity which if the Black Stars grab, can use to stun their Portuguese counterparts.

DISCLAIMER: The Views, Comments, Opinions, Contributions and Statements made by Readers and Contributors on this platform do not necessarily represent the views or policy of Multimedia Group Limited.
Tags:
Black Stars playbook
Mishael Quaynor