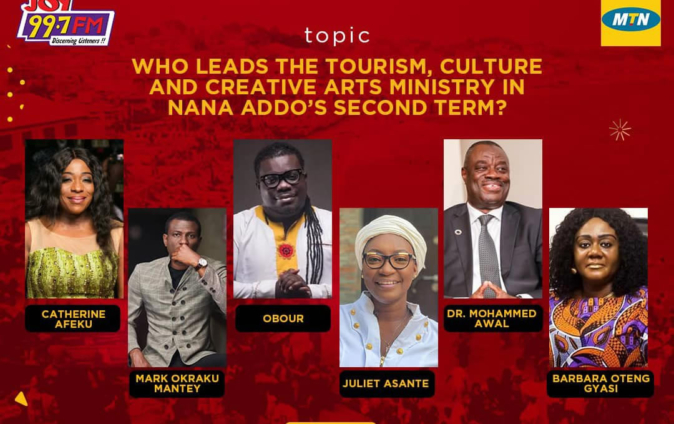 Since the inauguration of President Akufo-Addo on January 7, there have been speculations as to the constitution of cabinet in his second term of office.

It is the hope of the Creative Industry, in particular, that whoever is chosen will be someone from within the industry.

Speaking on Showbiz A-Z, some of Ghana’s notable industry players including CEO of 3Music Sadiq Abdulai Abu, Blakk Rasta and Jesse Agyepong suggested some names for the position.

Mark Okraku Mantey, Obour, among others were top on the list.

Sadiq Abu believes that the former Minister for Business Development Mohammed Awal or Akwasi Agyemang will serve the industry well as a substantive minister.

For Deputy Ministers, he stated that Mark Okraku Mantey who served as the President of the Creative Arts Council would be ideal for the position, especially in view of the tourism aspect of the ministry.

However, musician and radio show host Blakk Rasta is of a different opinion. He is of the view that other people besides those suggested by Sadiq should be given the opportunity to head the industry.

“I will rule out Mark Okraku Mantey totally, he is a guy I don’t trust. Obour is a nice person but I cannot be sure about how he handles money.”

“Akwasi Agyemeng (CEO Ghana Tourism Authority) is too slow, Catherine Afeku, I think and feel that she, for want of a better word, lacks a total understanding of the industry.”

He put forward like George Quaye as a person who has in-depth knowledge of the sector can lead adding that “we don’t have to be politicians to carry positions like that.”

JoyNews/AdomNews · Blakk Rasta's view on who should lead the Tourism, Culture and Creative Arts Ministry

Artiste manager George Britton also advocated for Dr Mohammed Awal with as Minister with Mark Okraku Mantey as his deputy.

He explained that he has observed Dr Awal’s impact in the Business Development Ministry and belives he is the best person to help transform the industry.

“They can drive our industry to a safe haven,” Mr Britton Added.

Talent Manager Kwame Agyemang Berko said that he does not approve of the call some of his colleagues have made to support the come back of former Minister Babara Oteng into the ministry.

He explained that she did not make any huge impact in the sector during her time as minister.

Mr Agyemang Berko said he, however, supports the call for the CEO of Ghana Tourism Authority, Akwasi Agyemang as the work he has done as CEO is commendable.

Entertainment pundit Jesse Agyeman stated that beyond the position, whoever takes up the role should have the drive and business acumen to harness the potential of the people in the sector.

“I would hope that we have a Ministry that has one minister and two deputies. I am recommending a deputy in charge of the creative art sector and another in charge of Tourism and Culture.”