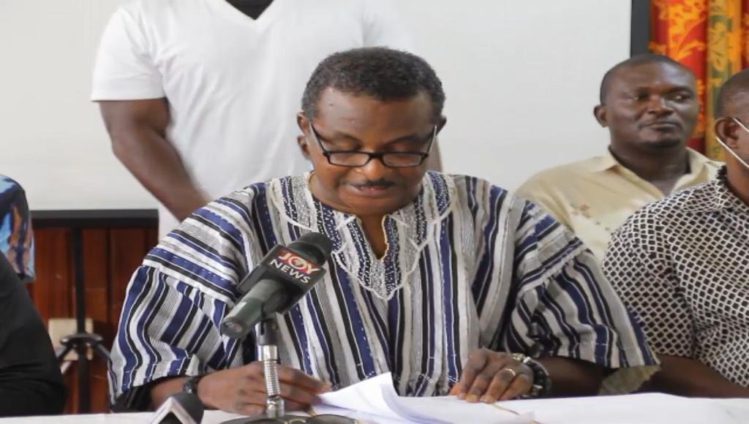 Two Minority Members of Parliament in Cape Coast are of the view that President Akufo-Addo should be blamed if there is bloodshed during the confirmation of his nominee for the Cape Coast Metropolitan Assembly’s Chief Executive role.

The nominee Ernest Arthur has been rejected twice by the assembly members and a third rejection will mean the President would have to nominate another person for the position.

The two Minority MPs, Kweku Rickett Hagan and Dr. Kwamena Mintah Nyarku held a news conference in Cape Coast where they accused the president and the New Patriotic Party (NPP) of forcing Metro Chief Executive nominees on them.

According to them, once the representatives of the people – the assembly members have rejected the nominee twice, it’s a reflection that the people do not want him and any attempt to force him on the people of Cape Coast, hence would be fiercely resisted.

He indicated that instead of the president nominating another person to fill the position, they want to use illegal approaches to force one person on the people.

“I would want to advise these responsible individuals to stop the meddling in the Cape Coast Metropolitan assembly elections. They have no business in our elections. The Transport Minister, the Regional Minister, the NPP Regional Chairman, Stephen Asamoah Boateng, Ophelia Mensah Hayford. Let me warn them that any blood that is spilled here in Cape Coast will not be on our hands but will be on the hands of the president and the hands of the perpetrators who have come to Cape Coast to force Ernest Arthur on us.”

The two MPs intimated they want the Interior Minister to investigate the invasion of the Invincible forces in Cape Coast to intimidate and harass the assembly members prior to the voting.

They stated: “The Assembly members would like the Security Agencies to investigate a speculation that the NPP’s invincible forces and land guards have arrived here in Cape Coast on Saturday, the 9th of October to intimidate the assembly members and the people of Cape Coast and brutalize them if necessary. They have no reason to doubt that the MCE nominee orchestrated that because he exhibited same during the elections.”

They further alleged that the Transport Minister, the Regional Minister and others who they say are involved in the ‘Operation force Ernest Arthur on Cape Coast’ are lodging at the Elmina Beach Resort calling assembly members one after the other and inducing them with money, motorbikes, and contracts to vote yes for Ernest Arthur.

The assembly members, they said have received no notification indicating when the elections would be held and have not been summoned.

George Kweku Rickett Hagan, the MP for Cape Coast South, who read their statement further indicated they doubt the president has once again nominated Ernest Arthur and challenged them to use the right procedure in communicating so.