Evo Morales has accepted an offer of political asylum in Mexico a day after resigning as president of Bolivia amid election fraud protests.

In a tweet, he said it hurt to be leaving Bolivia but he would return with more “strength and energy”.

Meanwhile, Bolivia’s military commander ordered troops to back up police who have clashed with Morales supporters.

Some 20 people were reported injured in the clashes. 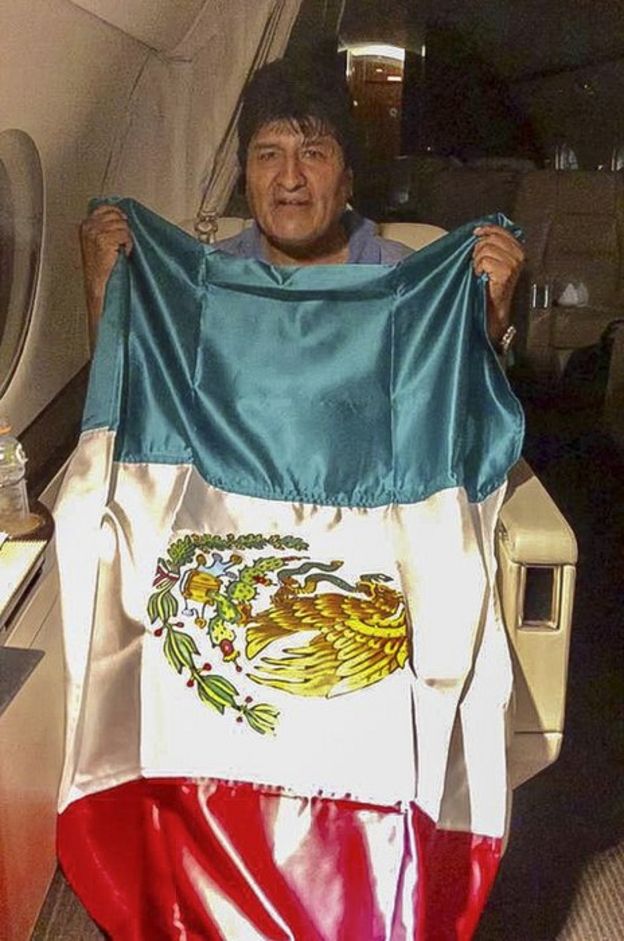 Mr Morales earlier urged his supporters to resist the “dark powers” that had forced him to step down.

The deputy head of the Senate has said she will take over as interim president until new elections are held.

Mr Morales, a former coca farmer, was first elected in 2006. He has won plaudits for fighting poverty and improving Bolivia’s economy but drew controversy by defying constitutional term limits to run for a fourth term in October’s election, which is alleged to have been rife with irregularities.

Up in El Alto, a city that sits high above La Paz in the Andes, life felt like it had stopped.

The cable car that connects the two cities was paralysed, its cabins bobbing in the air in silence. And a normally bustling market place was deserted, stalls shut for fear of looting.

Dania was one of the only shopkeepers willing to take a risk. She needs the money, she says. A supporter of Evo Morales, she says his resignation was nothing short of a coup.

Crossing the market, Lucy Choque makes her way to work through the burning rubber tyres that were set alight overnight. She just wants the whole thing to be over.

What did Mexico say?

Mexico has a left-leaning government and has supported Mr Morales. 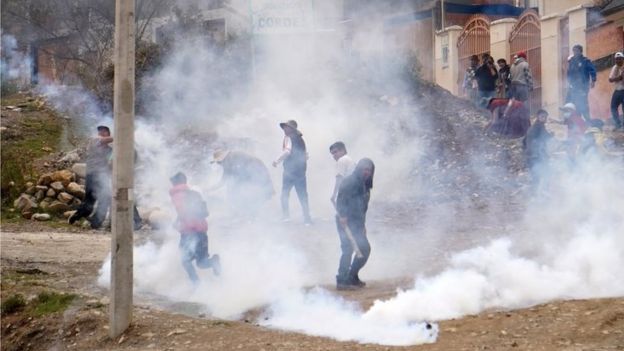 Why did Morales quit?

Pressure had been growing on Mr Morales since his narrow victory in last month’s presidential election.

On Sunday, events moved swiftly. First, the Organization of American States, a regional body, announced its audit of the election had found “clear manipulation” and called for the result to be annulled.

In response, Mr Morales agreed to hold fresh elections. But his main rival, Carlos Mesa – who came second in the vote – said Mr Morales should not stand in any new vote.

What really seemed to tip the balance was the intervention of the chief of the armed forces, General Williams Kaliman, who urged Mr Morales to step down in the interests of peace and stability.

Announcing his resignation, Mr Morales said he had taken the decision in order to stop fellow socialist leaders from being “harassed, persecuted and threatened”. He also called his removal a “coup”.

Reports say Mr Morales made the announcement of his resignation from El Chapare, a coca-growing rural area of Cochabamba and a bastion of support for him and his Mas party.

Opponents of Mr Morales have been celebrating across Bolivia, setting off fireworks and waving national flags, while his supporters clashed with police in the cities of La Paz and El Alto, according to local media reports.

Argentines and Bolivians also took to the streets of Buenos Aires on Monday to protest against his resignation.

His resignation met with mixed reactions from world leaders.

US President Donald Trump on Monday described it as “a significant moment for democracy in the Western Hemisphere”.

The Russian foreign ministry said a “wave of violence unleashed by the opposition” had not allowed the “presidential mandate of Evo Morales to be completed”.

The Cuban president, Miguel Díaz Canel, tweeted that what happened was “a violent and cowardly coup d’etat against democracy in Bolivia by the right”.

Spain expressed its concern over the role of Bolivia’s army, saying that “this intervention takes us back to moments in the past history of Latin America”.

The deputy leader of the Senate, Jeanine Áñez, said she would assume power as interim leader until elections were held.

Ms Áñez made the announcement after Vice-President Álvaro García, Senate leader Adriana Salvatierra and House of Deputies’ leader Victor Borda had all resigned, leaving her next in line to take over power temporarily.

“I assume this challenge with the only objective to call new elections,” she said. “This is simply a transitional phase.”

The opposition politician said she would convene the legislative assembly later on Monday to be confirmed as interim president.

But with Mr Morales’ party in control of both the Senate and the House of Deputies it is not clear if she will get the necessary backing from legislators.

Under Bolivia’s constitution, whoever takes over as interim president has 90 days to call fresh elections.