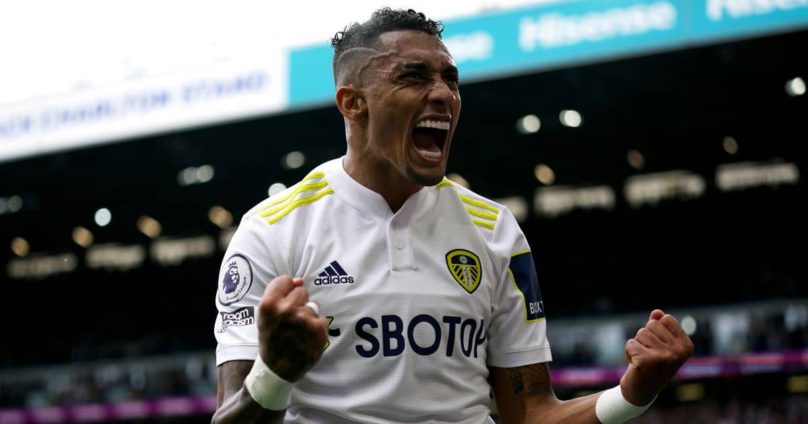 The Leeds United winger, 24, is fast becoming one of the Premier League’s most in-demand forwards. Whites fans were already well aware of the enormous talent and attacking threat Raphinha provides. So too are Liverpool who have been persistently linked with the flyer.

Indeed, Raphinha took his long-awaited chance with Brazil with both hands earlier this month.

In just 45 minutes on his debut versus Venezuela, Raphinha notched two assists and won a penalty. In his first start days later, he shone again, this time bagging two goals in a World Cup qualifier against Uruguay.

As such, TEAMtalk can now reveal Raphinha’s exploits have grabbed the attention of fellow Brazilian Neymar. That has led to the forward putting in a word with the PSG hierarchy.

PSG are looking for possible reinforcements in 2022 ahead of the anticipated departure of Kylian Mbappe. Neymar is understood to be working hard on sporting director Leonardo to go Brazilian – a route the Parisians have never been shy about taking.

The French giants were already chasing a Premier League-based Brazilian in the shape of Richarlison.

They are still looking at Richarlison, but have now joined the hunt for Raphinha – who they liked before his move to Leeds. Raphinha was especially known to PSG having starred with Rennes in Ligue 1 before moving to West Yorkshire.

The French powerhouse are considering options for bolstering their forward line in 2022. As well as Mbappe, Angel Di Maria is out of contract next year.

The recent comments of Raphinha’s agent, Deco, did not suggest his client will be in West Yorkshire for the long term.

Meanwhile, Kevin Phillips feels Leeds United could bring in upwards of £40million for Raphinha. But that’s only if he complete two objectives this season.

“You’ve got to be talking £40million plus. Leeds certainly wouldn’t expect to receive offers of anything less than that,” he told Football Insider.

Though football agent Eduardo Uram feels the Brazil star would warrant at least a £50million fee. Leeds fans could argue with some justification that Raphinha is worth even more than that.

And Phillips feels that Raphinha needs to do two things this season to cement his price rise.

“If he finishes the season strongly, and gets more international caps under his belt you would have to expect bids for around that amount,” he added.

“He just needs to take that form he found away with Brazil and use it to help Leeds get away from the bottom of the league.”