Breaking national 4x100m Relay record was not a surprise – Azamati 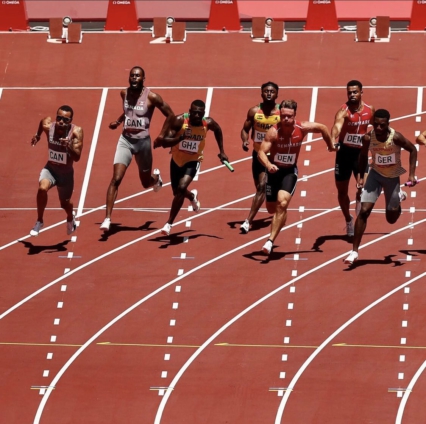 National 100m record holder and member of the 4x100m men’s relay team, Benjamin Azamati has revealed that breaking the 24-year-old record of 38.12s at the just ended Olympics did not come to his team as a huge surprise.

Ghana booked a place in the final of the men’s relay event after qualifying as one of the ‘fastest losers’ with a time of 38.08s at the Tokyo Olympic Games.

The quartet of Sean Safo-Antwi, Benjamin Azamati, Emmanuel Yeboah and Joseph Paul Amoah broke in the process broke the national record which stood at 38.12s.

The record was set at the 1997 World Championships in Greece by the quartet of Abu Duah, Eric Nkansah, Aziz Zakari and Emmanuel Tuffour.

Azamati explained, the feat didn’t look beyond this group in an exclusive with Joy Sports.

“So, it was not really surprising we knew our capabilities, it was just about getting the stick around and we did that, and we were happy that we came out with the 38.08.

“But it all boils down to us being together and having the chemistry and the kind of bond that we had. It really played a role in us finishing with this time”.

Benjamin Azamati despite running a season best of 9.97s to break the 100m National record failed to make the semi final of the 100m at the Multisport event. The west Texas A&M student run a time of 10.13 seconds which saw him finish fourth behind Australian Rohan Browning and Jamaican Yohan Blake .

He told Joy Sports lack of competitions in the crucial months ahead of the Olympics was telling.

“I will say that I have not competed in about two months prior to the Olympic games, so I will say I was not in race shape because the others had raced two weeks prior to the games and all.

“So, my reaction was slow and all that and I think that amounted to that. I could say that this is one of the poorest races I have ran in the whole of this season but as you know it is an experience, I just have to learn and build up on that”.
Azamati heads back to West Texas with the hope of making it back on the big stage via the 2022 World Athletics Championships, the 2023 African Games or the 2024 Olympic Games to be staged in France.