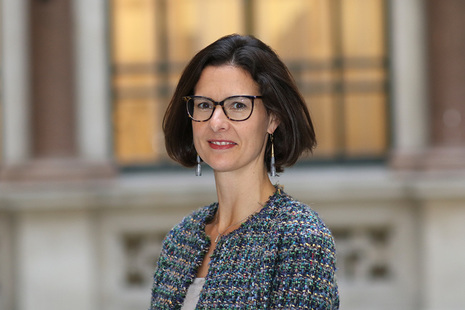 The Dean of Ghana Armed Forces Command and Staff College (GAFSC), has condemned the tweet by the British High Commissioner, Harriet Thompson on the arrest of Convener of FixTheCounty, Oliver Barker-Vormawor.

Speaking on Top Story on Tuesday, Dr. Vladimir Antwi-Danso stated that “from an innocuous situation, I do not think the tweets are necessary at all.”

He said the tweet by the British High Commissioner deviates from standard practice as a diplomat.

“If she felt anything bad about what the Police had done, the standard practice was to call the Ministry of Foreign Affairs and complain that this is against International Human Rights,” he pointed out.

This, Dr. Antwi-Danso stated, is the normal diplomatic practice.

However, “to tweet with innuendos like watching how it will go and then FixTheCountry again, those words are such that they can incite anything in the view of instability.”

He explained that such comments from these diplomats have caused instability throughout the world.

“The orange revolution in Ukraine, who started it all? and look at where we are today. In Syria, Libya and Iraq these revolutions come because of the interference of High Commissioner’s and Ambassadors, especially when they begin to poke their noses in the international affairs of those countries and talk on any innocuous situation,” he cited.

The British High Commissioner, Harriet Thompson, in a Tweet on Tuesday, May 17, said she looks forward to seeing how the arrest of the convener of the FixTheCountry Movement will turn out.

Oliver Barker Vormawor, convener of #FixTheCountry movement, arrested again, I understand for a motoring offence on his way to court. I’ll be interested to see where this goes… https://t.co/iK5hZDZUln

The tweet comes after officers of the Motor Traffic and Transport Department (MTTD) of the Ghana Police Service arrested Mr. Barker-Vormawor on Tuesday, May 17 and was charged with careless and inconsiderate driving and granted bail to the tune of GH¢30,000 bail with two sureties.

Meanwhile, the Ghana Police Service has responded to the British High Commissioner, Harriet Thompson, over her comments in relation to the arrest of the convener of the FixTheCountry Movement.

The Police in a four- paged letter signed by the IGP, Dr. George Akuffo Dampare to Madam Harriet Thompson said her tweet was from either a “biased or uninformed position.”

Even though the IGP said the Service would ordinarily not respond to such comments, it is doing so from a previous painful experience.

The Ghana Police Service asked the British High Commissioner to Ghana, Harriet Thompson, to mind her own business.

But the Minority in Parliament have expressed their disappointment by the Ghana Police Service’s response to the British High Commissioner over the arrest of Fix The Country convener Oliver Barker-Vormawor.

Speaking to the press on Tuesday, Minority Leader, Haruna Iddrisu stated that the response has sparked their concern about the “consistent” undermining of freedom of speech in the country guaranteed under the 1992 constitution.

“Freedom of expression remains the most fundamental building block of a democracy and if a diplomat can be questioned simply for saying that ‘how will this one too go’. You see, Ghana must operate under rule of law not rule of Nana Addo Dankwa, he is not rule of law, he is not. But he must exemplify and live by it as President of the republic,” he said.

DISCLAIMER: The Views, Comments, Opinions, Contributions and Statements made by Readers and Contributors on this platform do not necessarily represent the views or policy of Multimedia Group Limited.
Tags:
British High Commissioner
Dr. Vladmir Antwi Danso
Harriet Thompson