Burkina Faso's military has said it will install a transitional government, days after it seized power as President Blaise Compaore's resigned.

The move came after soldiers had fired shots at the state TV station and barricaded the capital's main square as thousands of protesters demanded the military give up power.

At least one demonstrator was killed in Sunday's clashes.

The UN has also condemned the military takeover and threatened sanctions.

The army named Lieutenant Colonel Isaac Zida as the leader of a transitional government on Saturday.

However, thousands of protesters gathered on Sunday in the capital Ouagadougou, demonstrating against the army.

On Sunday evening, following a meeting with key opposition figures, a military spokesman said the army would put in place "a transition body… with all the components to be adopted by a broad consensus".

"Power does not interest us, only the greater interest of the nation," the military said in a statement (in French). 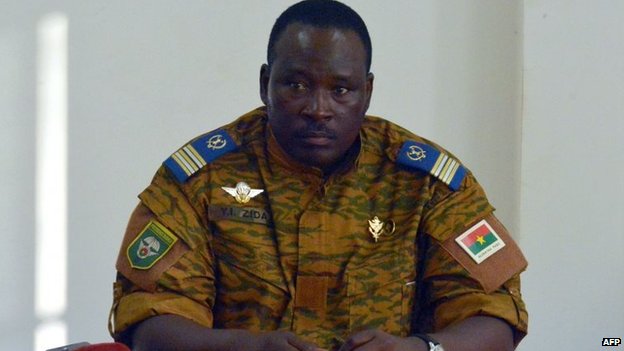 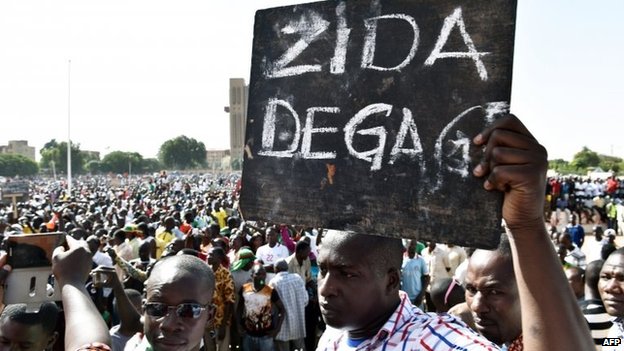 It had been necessary to disperse protesters to "restore order", the statement said, adding that one demonstrator outside the state TV station had died.

There were chaotic scenes at the state broadcaster's headquarters on Sunday, as both opposition leader Saran Sereme and former Defence Minister Kwame Lougue turned up to a rally.

It is believed that both had gone there, separately, to announce that they could head the transition government.

However, shortly after they arrived, gunfire broke out and staff and protesters fled.

Witnesses told the BBC that soldiers had fired in the air to disperse protesters before forcing journalists to leave.

After the confusion of these past few days, the situation was very tense on Sunday in Burkina Faso's capital.

People were back on the streets this morning to demand the return of civilian rule.

But then shots were fired next to the national television station and people were scared, fleeing in all directions. After that, we saw crowds disperse and flee every time they saw an army vehicle.

Some are angry at the army. Other says the latest violence is the responsibility of the presidential guard – commanded by Col Zida.

'Country in chaos': Voices from Ouagadougou 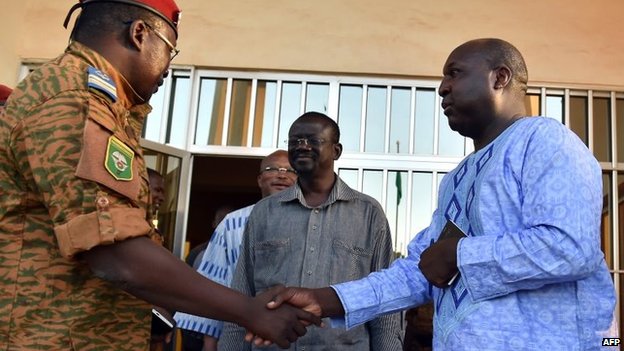 However, Ms Sereme reportedly left before the talks began and there were no details on what was discussed.

Parts of the parliament building were set on fire, and the president fled to Ivory Coast.

Under Burkina Faso's constitution, the president of the Senate should take over after the national president resigns and an election should take place between 60 and 90 days afterwards.

The African Union, the US and regional economic bloc Ecowas have all condemned the military takeover.

The UN's West Africa envoy Mohamed Ibn Chambas said the military must allow a civilian transfer of power, and sanctions were a possibility if this did not happen.