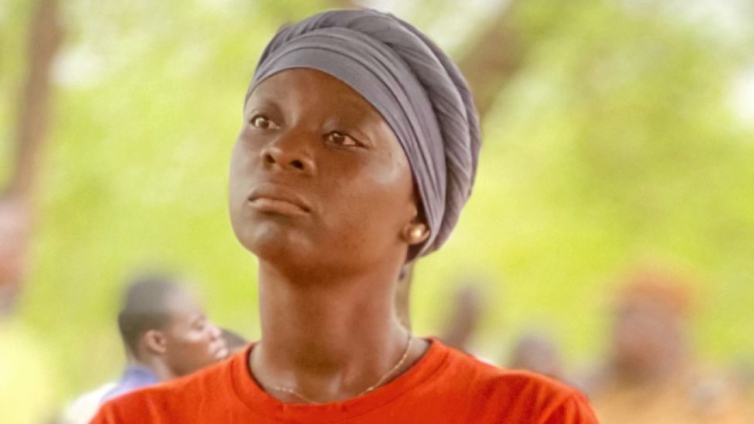 Edith Moné is hopeful that her husband will be found alive

Loud Christian prayers ring out each day like a song as relatives of men trapped a month ago in a mine in Burkina Faso try desperately not to give up hope.

It has taken the rescue team 31 days to reach the first rescue chamber in which the missing miners might have sought refuge from the flood waters that engulfed the Canadian-owned Perkoa zinc mine after unexpected torrential rains on 16 April.

But when the chamber was opened this week, none of the men – six Burkinabès, a Zambian and a Tanzanian – were there.

Now their families’ hopes rest on a second chamber located right at the bottom of the 710m mine.

Also known as survival rooms, they are sealed off and can offer safety with oxygen and are stocked with water and snacks.

The relatives – made up of about 20 women – sit on mats and wooden chairs shuffling rosaries in their hands in an open area set up for them in the town of Réo, about 12km (seven miles) from the site of the mine.

The authorities arrived on Tuesday to announce the bad news about the first refuge chamber, located between 560m below ground.

Journalists were asked to leave to give them more privacy; a Muslim cleric joined the officials and ended with prayers to calm the gathering as shock set in.

But gasping and sobbing could be heard – one woman cried so hard and for so long that she looked like she was going to vomit.

But Edith Moné, a wife of one of the missing miners, tells me she will stay here with the other women, who act as a support group for each other.

“When I go home and I see my children, I remember how they used to greet my husband when he would come back from work, and how he used to behave with them. I dread going back home now. I flee the house because I cannot handle it.

She looks fragile, with eyes weary from crying: “We will stay here until our husbands get out of the hole.”

She still has hope and faith that her husband will make it out alive, but admits she is ready to face the worst: “If our husbands pass away, we will have no choice than just being courageous and bear it.”

Aisha Kinda, who is pregnant, told me that the women came to this field on 5 May – initially to protest and ask about the whereabouts of their husbands.

She says she is praying for a miracle: “I need him in our lives. He used to make me laugh, I miss it all.”

Experts from around the world

All mining work at the mine, located about 120km west of the capital, Ouagadougou, has been stopped – and everything is focused on rescue efforts.

A stony path that leads to the mine’s entrance is usually busy with heavy vehicles and workers.

For now, it is just rescue workers leaving and entering the mine, which looks like a black hole.

More than a month after the tragic event, a 24-hour-a-day rescue mission has been under way using specialised equipment that has been brought in from Ghana and South Africa.

Millions of litres of water has so far been pumped out of the mine, allowing the rescue workers to reach the first refuge chamber. After the thunderstorm the waters settled at about 520m below ground.

Conditions have been difficult for the engineers trying to locate their missing colleagues, working in very humid conditions.

While hope is focused on the rescue chambers, there has been no actual sign of life so far.

A wife of one of the men told the BBC that her husband was either working at 610m or 620m below ground when the water entered the mine: in less than an hour, 125mm of rain fell – five times the usual amount for April.

“We’ve brought in experts from all over the world. We’ve got people from Australia, from South Africa, from Canada,” Ricus Grimbeek, the CEO of Trevali Mines Corporation, which owns Perkoa mine, said about rescue efforts.

But he admitted that the nature of the accident meant things were difficult.

“We’ve got to be realistic, that refuge chamber is not designed to be inundated with lots of water. It is more designed for rock falls and noxious gases.”

On Tuesday, the company said search crews would continue to work at maximum capacity until the missing individuals were found.

“This is devastating news, and we would like to offer our deepest sympathies to our colleagues’ families and friends during this difficult time,” Mr Grimbeek said.

Burkina Faso’s Minister of Mine, Jean Alphonse Somé, confirmed that the search was far from over.

“The government is committed to continue the pumping work a bit deeper and further in the bowels of the earth, to find out if our eight brothers have found another refuge outside the one we expected them to be in,” Mr Somé said.

According to some observers, all the officials – from the government and mine – are aware of the cultural sensitivities over this.

For all religious communities in this part of Burkina Faso , it is important to have a body to bury – for any grieving to begin.

So while many have drawn their own conclusions, no-one is going to give up until the eight miners are found alive or dead.