‘Why did you set me on fire?’-Burning violence against women in Ghana 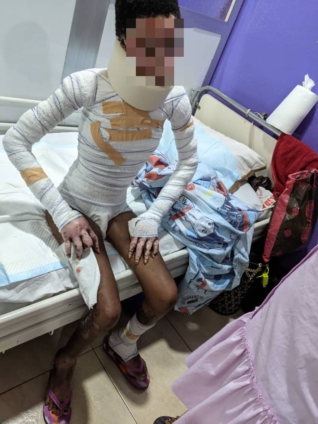 According to a report by the Ministry of Gender, Children and Social Protection, more than 38% of women between the ages of 15 and 49 years have experienced physical, psychological and sexual violence by a husband or intimate partner.

One of the less talked about issues is violence against women by burning.

Joy News medical reporter, Christine Yaa Tsuba Boahene has been moving from one female victim to the other and the similarities among their stories were saddening yet all too familiar.

In her attempt to delve deep into their stories, she became aware of how intimate spousal violence is destroying the lives of many Ghanaians.

“My 17-year-old self, knowing very little, yet desiring an intimate relationship gave in to his advances,” Akosua recounts how she met her 22-year-old boyfriend, Alex.

“My sister was happy for me; sometimes in my own prayer corner and narrow mind, I would pray that she would get someone who would bring her such joy, too.”

Akosua’s mother was however not amused at her fledgling affair. She asked her to end it.

“When the news got to my mother, she was in opposition of my move at this young age and asked that I cut things off with him”.

Akosua, for the sake of good will, decided to tell Alex in person. Unhappy Alex, who couldn’t handle the news, threatened to harm Akosua should she maintain her position.

“Trying to be a good child, I made the journey to his house to break the sad news which he didn’t take lightly.

“He visited me later that evening to rain down threats on me, little did I know that he would be true to his words.

“Truly, he returned at dusk, poured petrol over our door and porch and set us on fire in our little self-contained home and fled.

“When I accepted his proposal, I didn’t know I was setting myself up for a fire fight one day,” she sadly ended.

Akosua has since been on admission at the Komfo Anokye Teaching Hospital in Kumasi. She sustained burns from head to toe. Literally, anywhere you expect to see skin has shriveled up.

Unfortunately, her aunt and cousin couldn’t make it.

The WHO describes Intimate Partner Violence (IPV) as one of the most common forms of violence against women.

This includes physical, sexual, emotional abuse and controlling behaviors by an intimate partner. A 2020 report has found women engaging in violent behaviours in relationships with men which are often in self-defence.

However, the most common perpetrators of violence against women are male intimate partners or ex-partners.

Dr. Fiifi Yankson of the Burns Unit at Komfo Anokye Teaching Hospital in Kumasi, reveals that such cases of intentional burns are not entirely new.

According to him, “The patterns are however irregular, they can go as far as half a year before a case or two may come in and at other times, they can have about 2 or 3 of such cases weekly, especially during festive seasons.”

The common arsenal used for such acts include petrol or kerosene. There are reports of the use of acid on the body of victims.

The topmost reason for such occurrences being relationships that have gone sour and one decides to get back at the other.

Dr. Daniel Fordjour, a clinical psychologist at Komfo Anokye Teaching Hospital, added that “sometimes it may not really be about the fire. The fire may only be a tool. People want to find a way of achieving something.

He continued, “They resort to wrong ways of dealing with their loss or frustrations”. So then it becomes, an ‘if I can’t have this, then no one will’ kind of end – and these are rather unhealthy coping mechanisms people employ.”

He also mentioned a psychiatric condition known as pyromania as a possible reason why people set others or things on fire.

Pyromania is where some individuals set things on fire just for the pleasure it brings to them. Such people just enjoy seeing things go ablaze.

At Kronum, a suburb of Kumasi in the Ashanti region of Ghana, a 10-year-old class 4 pupil, Priscilla lived with her twin brother, her biological mother, step father and a step sister.

A normal day in her life would include witnessing a squabble between her step father, a 37-year old trotro driver and her biological mother, a hairdresser.

It was not any different one late Thursday evening when the subject of the argument was a new phone her mother had acquired mainly because her step father had recently destroyed her mother’s phone and specifically warned her not to get a new one.

Later that night, while they slept in a room they all shared, her mother witnessed her step father disgorge what looked like clear fluid from an aqua bottle around the room shortly after he had escorted his biological daughter out.

All the while, her mother thought he was being superstitious, perhaps trying to protect himself from evil spirit. Little did this pre-teen know that she would wake up to their house and four other houses on fire, an injured mother, a twin brother who was in deep sleep dying in the fire, herself incurring burns from her waist all the way down.

Victims like Priscilla may have to have a limb or two amputated, others, a total facial deformity, and loss of sight among many things.

Some may sustain inhalational burns and some even lose their lives due to the extent of damage and the body’s inability to overcome the stress of extensive burns.

The duration of hospital stay depends on the extent of burns the victim sustains.

The victims go through many complex procedures to correct the damage.

“We do burn resuscitation, ‘escharatomy’, ‘fasciotomy’, debridement depending on the extent of injury, and about 2 or 3 sessions of skin grafting. If they happen to develop any contractures, they would have to go back into surgery for its release,” Dr. Fiifi Yankson said.

My checks revealed hospitalization could range from as little as 3 days to 3 months, and that comes with a huge financial commitment.

“Patients with extensive burns can have bills going as high as GHC20, 000 by the date of discharge. That is aside from the usual GHC200 to GHC300 they will be spending weekly on purchasing materials such as gauze, cotton, antimicrobial agents among others – needed for their regular wound dressing, as those are not covered under the hospital bills.

“I wondered to myself; that after having to buy all these wound care materials, what really goes into the hospital bills? – and that will be the cost of the series of procedures these unlucky ones have to go through before they can get close to normalcy in terms of body structure and function again,” Dr. Yankson intimated.

“I must say, plastic surgery procedures are not cheap,” he added.

Sadly, the National Health Insurance Scheme (NHIS) has little to no support for such patients, as it does not even cover the cost of the wound dressing materials such as the gauze, bandages and antimicrobial agents.

Though a few medications may be under the scheme, the subsidy is between 15-20%.

Interestingly, a 2019 report has found that most of the victims of such unfortunate situations are the low and middle class groups.

There have been instances of some of these victims receiving support from NGOs, philanthropists and some family and friends, especially in the initial stages.

However, the management of burns is a long journey, so these benefactors sometimes get weary and end up giving up.

The physical harm from these forms of violence are well-documented. Society is more inclined to worry about the visible effects.

It is worrying that society tends to ignore the psychological toll on the victims and their families. Perhaps, we are not well versed on that matter.

Dr. Fordjour highlighted that victims with burns to their faces usually have anxiety which is a recipe for depression.

“If they have any sleep at all, they wake up each day, living in anticipation of what they may look like. This prolonged anxiety pushes them into depression,” he explained.

“The victims come in very hurt and already depressed. The pain of the burn is enough to put them in that state even before the emotional hurt sets in to give a synergistic effect,” he added.

To add to their psychological bouts are the sneer from visitors of other patients in their wards.

“Constant visits, having to deal with how the burns occurred, being referred to as ‘This is the relative of the one who got burnt’ among others can worsen the case. The stigma alone crumbles them,” he said.

For cases involving children in which domestic violence is suspected, the health professionals take charge and play a role in informing the right authorities, for example, the police, who will then carry out investigations from there.

When it comes to cases involving adults, Dr. Fiifi Yankson says, “we encourage them to report the cases for which they would apply for a medical report to file the case”.

For these two real life stories, we commend the Ghana Police Service for playing their part in arresting the perpetrators. But for the many that go away unpunished, we continue to wonder.

DISCLAIMER: The Views, Comments, Opinions, Contributions and Statements made by Readers and Contributors on this platform do not necessarily represent the views or policy of Multimedia Group Limited.
Tags:
burning violence
Gender-Based Violence