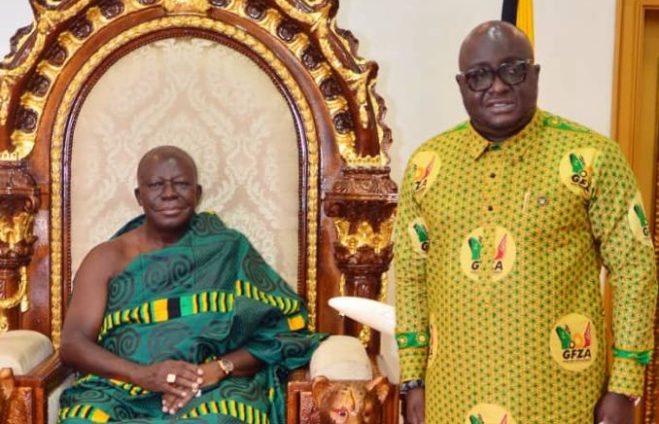 As part of a three-day visit to the Ashanti Region, Chief Executive Officer of the Ghana Free Zones Authority Michael Anny Oquaye, and his management team paid a courtesy call on Otumfuor Osei Tutu II.

The visit formed part of the CEO’s drive to engage with key stakeholders as he works towards the export-oriented vision of President Akufo-Addo.

Mr Oquaye presented the Ghana Free Zones Industrial developmental plan for the Kumasi Export Processing Zone to His Royal Majesty and informed him of steps to eject land encroachers from the site to pave the way for the start of the project.

The Land, acquired in 2005 as one of Ghana’s Export Processing Zones, is set to receive the needed facelift as the country positions itself as the Export Hub within the sub-region

The funding is part of a World Bank facility extended to Ghana to develop the Greater Kumasi Industrial Park.

As part of efforts to get the project started on time, the World Bank engaged consultants in partnership with the Ministry of Trade and Industry to undertake several exercises, including site assessment, best practice benchmarking, environmental and social impact assessment.

On-ground inspection is set to start from October 2021. Hence, it has become critical to eject all the illegal structures to pave the way for the planned development.

On his part, His Royal Majesty congratulated Mr Oquaye on his appointment and expressed his confidence in the former Ambassador to deliver on the new mandate given to him by the President as he did during his tenure as Ghana’s Ambassador to India.

The Asantehene added that he supports the steps to remove all illegal structures and encroachers who have acted without attaining building permits from the Ejisu Municipal Authority.

Otumfuor Osei Tutu II recalled how he supported the acquisition of the Land in 2005 and lamented its abandonment all these years.

However, he was optimistic that the new focus on the Greater Kumasi industrial project would see the Land being put to its intended use.

The Management team of the Ghana Free Zones Authority made a donation to Manhyia during the visit.