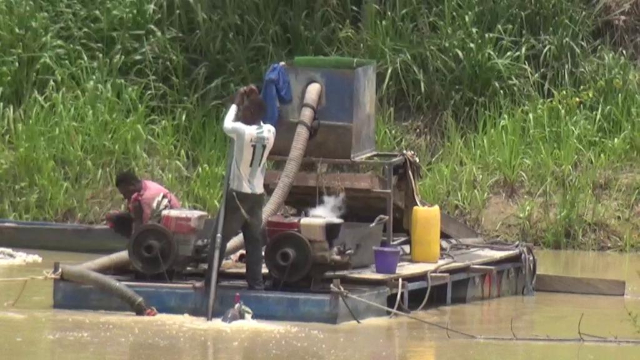 Mounting of dredging equipment, known as Chang-Fa, has become common in desperate search of gold by miners. It consists mainly of motor-powered barrel-like apparatus held together with steel and plywoods cover the platform.

The empty barrels beneath allows it to float on the river. The alluvial stand on the platform to dredge for gold and wash here, discharging a lot of waste into the river.

Commander of Operation Vanguard, Colonel William Nortey, is alarmed at the increasing usage of the Chang-Fa, despite interventions to deal with the menace.

“Over 10, 800 of them have been destroyed by our activities, however, more and more are coming in. The question is who is benefiting from their sale? Their importation and distribution should be checked”, he said.

It is unknown how the engines come into the country but it is mostly sold by Chinese and with local materials, the full equipment is manufactured in the bush.

Odaso Water Treatment Centre which supplies water to the people of Obuasi and its environs could be shut down due to the activities of these water dredgers.

It now costs more to treat the water due to excessive pollution.

The river which saw significant improvement in the quality of water at the height of the anti-galamsey fight is fast deteriorating again.

To prevent further pollution, the Chang-Fa on the rivers will have to be taken off and this is what the Small Scale Mining Taskforce set out to achieve.

The Small Scale Mining Taskforce took a trip to Aburokyire Krom, a community in Amansie Central District, through which River Oda flows.

Shockingly, the miners had through informants positioned along the road, so they got wind of the arrival of the task force team and bolted even before they got there.

They left behind the Chang-Fa whose engines they lowered in an attempt to hide them. Somehow, the task force managed to locate them and destroyed them. Other Chang-Fa engines were found hidden in the bush.

Later, one Bright Ankomah, who claimed to be Chairman of the Local Unit Committee showed up with four others to demand the release of the seized equipment but they were rounded up.

“I reported the matter to the District Chief Executive who sent security men here to drive them away but they keep coming back. I am against their operations but some of them are married to our family members so our people can’t give information about them,” he added.

A task force of small-scale miners has, in a special operation in Ashanti region, arrested 11 illegal miners and destroyed equipment worth over ¢60,000 on the Oda River.

Five other Chang-Fa engines purposely made for the activity were destroyed in the community, with other equipment ceased.

Leader of the operation, Bresie Andoh explained that logistical constraint impedes their work.

“We once pursued them till they were no more. After that, the water was getting clearer and the Ghana Water Company confirmed it. But they are back and destroying the water. Now, we will need vehicles and safety jackets to pursue them again,” he added.

All eleven suspects and seized equipment were handed over to the police for prosecution.

The taskforce, inaugurated in 2012, has been working with security agencies to prevent mining along river banks.