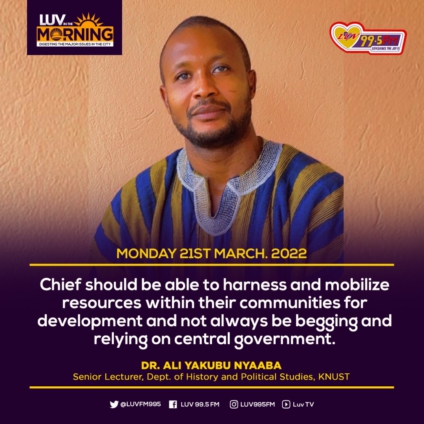 A Senior Lecturer at the Department of History and Political Studies at KNUST, Dr. Ali Yakubu Nyaaba, has shot down suggestions for chiefs to be given a portion of the District Assembly Common Fund for local development.

There have been several calls for a percentage of the district assembly common fund to be given to the chiefs to aid develop their areas of jurisdiction.

Dr. Ali Yakubu Nyaaba, however, believes that chiefs should be able to harness and mobilize resources within their communities for development and not rely on the central government.

He spoke on ‘Understanding the Role of Chieftaincy in Nation-Building; from the History and Political Science Viewpoint” on Luv Fm, as part of the station’s Ghana Month series.

In reference to a study by Dr. Kofi Abrefa Busia, the lecturer noted that “Chiefs wielded judicial, religious, economic and political power. These structures were grounded in custom and the people revered the chief and the chief in turn also made sure he made the people comfortable because it was his duty”.

Dr. Nyaaba believes chiefs have lost the legitimacy of their people because of their actions and inactions.

“Some chiefs see the opportunity to serve their subjects as a means to use their office to attract elites and have their share of the national cake,” he observed.

In the view of the Chief of Amakom in the Ashanti region, Nana Adu Mensah Asare, Ghana’s post-colonial constitution provides little for chiefs to do in ensuring effective governance at the local level.

He observed the role of chiefs are currently limited “to settle disputes, organize communal labour, organize ceremonies and festivals, which cannot bring a cogent level of development in the country.”

Dr. Nyaaba emphasized chiefs are not supposed to just be ceremonial heads, but they are to be development agents in their jurisdictions. He pointed to colonial authorities for introducing alien tactics to erode the role of chiefs in development.

DISCLAIMER: The Views, Comments, Opinions, Contributions and Statements made by Readers and Contributors on this platform do not necessarily represent the views or policy of Multimedia Group Limited.
Tags:
Chiefs
Chieftaincy
Dr Ali Yakubu Nyaaba