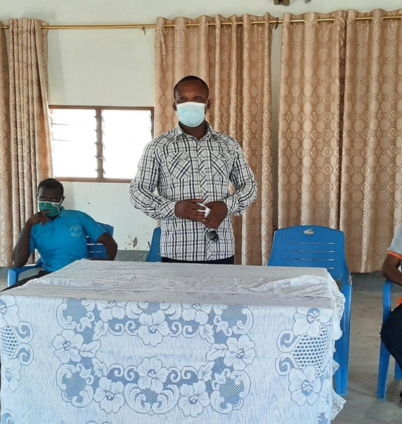 This will depend on support from their Member of Parliament (MP), benevolent societies and individuals.

He said three large communities constituted the Namonsa Electoral Area with a population of about 3,000 people who depended on one CHPS compound serving Akuter-yeri and Chondema.

“The CHPS compound is actually situated at Namonsa, and that is at the far end of Chondema and Akuter-yeri and they actually suffer the most when it comes to access to health care delivery.”

Mr Akpitipulah said this in an interview with the Ghana News Agency at Akuter-yeri on the side-line of a graduation ceremony organised by the Anglican Diocesan Development and Relief Organization (ADDRO) for 39 caregivers in the area.

He explained that Chondema was in between Namonsa and Akuter-yeri, which had access to the only CHPS compound in terms of distance, whereas patients and clients, especially pregnant women from Akuter-yeri struggled to gain access to the facility for Antenatal services.

He said even though the community had some cases of maternal mortality owing to the situation, health professionals complained about the poor turnout for Antenatal services.

“Many a time, pregnant women don’t want to go for Antenatal just because of the distance they have to walk to access health care. So we want to initiate our own project to enable health staff provide services to us.

“It means some of them deliver at home and some visit the facility in bad conditions as they delay at home. If the health professionals cannot assist, the women are referred to the Chuchuliga Health Centre, and if they cannot manage, they also refer to Sandema Hospital.”

He said if they had a CHPS compound to cater for the Akuter-yeri community, pregnancy related complications would be minimal “Because if they attend Antenatal, and health professionals are able to monitor them any challenges detected would be managed before the day of delivery.”

According to the Assembly Member, community members also faced challenges with Post-natal services, as new born babies may not be able to take all vaccines expected of every child.

He said “The vaccination is however not too much of a problem to us because with the vaccines health professionals reach out to children at homes and in schools. The issue of pregnant women is actually our main challenge.”

Mr Akpitipulah said Madam Juliana Anam-erime Akugri, the Builsa North Municipal Director of the Ghana Health Service, assured them of the assistance of the Service.

“We are praying and hoping that when we start on our own, benevolent organisations, philanthropists and individuals would assist us to complete the two rooms we want to begin with,” he said.

Asked if the assistance of the MP, Mr James Agalga was sought, the Assembly Member said “The MP has been approached. He is at the moment undertaking a lot of these projects.

“He actually told us that by the end of this year, he would finish those projects, and so we should allow him finish the ongoing projects. We want to start on our own so that his support would later help us to complete the building,” Mr Akpitipulah said.