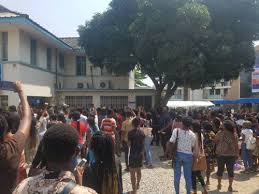 A group identified as the Concerned Tertiary Students of GIJ (CTSG) has called on the management of the schools to rescind its decision to increase fees for the 2020/21 academic year.

In a press statement Tuesday, they stated various reasons for the need to ensure this expedite this action.

With regard to their school, Ghana Institute of Journalism, they said the 5% spike in fees was not formally communicated to the student body by any authority hence it should be considered illegal.

“Concerning our school, the Ghana Institute of Journalism, there has not been any official communique from the management to students about the increase in fees. This increment, termed as proposed, has however been circulated on student platforms and equally stated on every student’s academic portal.

“We state that since there has not been any official notice from the parliament of Ghana substantiating fee increment, it is enough to say that the fee increment is illegal, a subtle form of exploitation, and should be treated as such by all sundry,” the statement read.

They iterated that the ‘inconsiderate decision’ has left a large number of students on the verge of dropping out of school as they cannot afford to pay the extra sum.

CTSG further noted that students across tertiary institutions did not fully benefit from the fees they paid for the previous semester which was abruptly cut short due to the outbreak of Covid-19 and its accompanying developments.

According to them, “several calls from some student bodies for a refund have however not been heeded to”.

They, however, recommended that the management of the school comes forth to explain the structure and schedule of the upcoming semester.

Meanwhile, the group appealed to the government to listen to the plea of tertiary students and respond affirmatively to their call for fee reduction.

The coalition stated that “students are poised and ready to, by any means necessary, seek redress and thus issue an ultimatum of fourteen days after which we will result in using other mechanisms to seek justice due to the increasing number of student agitations.”

The Convener of the group is Mohammed Samira Ibn Moro.

DISCLAIMER: The Views, Comments, Opinions, Contributions and Statements made by Readers and Contributors on this platform do not necessarily represent the views or policy of Multimedia Group Limited.
Tags:
Fee Increment
Ghana Institute of Journalism