Coronavirus: Russia’s Putin gets vaccine but without cameras 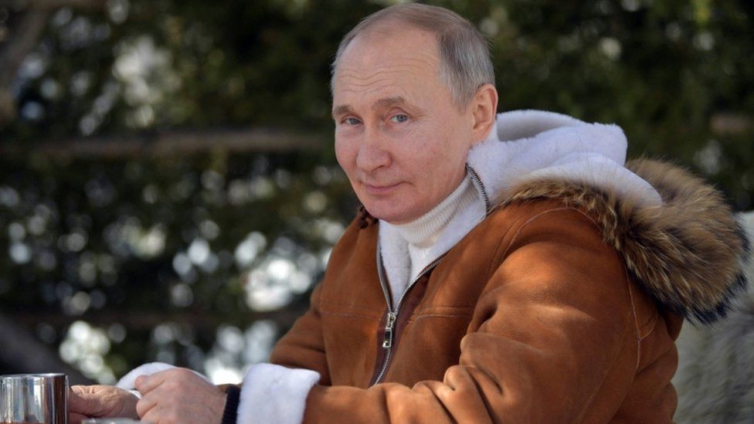 Vladimir Putin has been vaccinated against Covid-19, partly to encourage other Russians who remain deeply reluctant to get the jab.

Although he has previously been filmed on horseback, ice skating, and flying with Siberian cranes, he chose to be vaccinated behind closed doors.

The Kremlin has not specified which vaccine Mr Putin received.

The aim was to underline “all three Russian vaccines are absolutely reliable, very good and effective,” spokesman Dmitry Peskov said.

Speaking to the BBC, he brushed off the suggestion that showing President Putin getting a shot in the arm would help persuade the sceptical majority of Russians to follow suit.

As for believing the president actually had the jab, he said people would just have to “take our word for it”.

There’s likely to be a limited increase in the slow pace of vaccination as a result.

The president’s own daughter took part in the Sputnik V safety trials, but he’s seemed oddly cautious given how highly he recommends the jab for others. Mr Putin, who is 68 years old, initially claimed he was waiting until it had been deemed safe for the over-65s. Later he said he’d wait for autumn when his doctors could fit the Covid shot in his “vaccine schedule”.

Mr Putin also told a gathering of Russian news editors that he wouldn’t be a “performing monkey” and get vaccinated before the TV cameras, surprising many with his sudden camera-shyness.

Mr Putin revealed on Monday that 6.3 million Russians had so far received one dose of a Covid vaccine since he became the world’s first leader to announce a “large-scale” vaccination back in December. That’s only around 5% of the adult population.

His target is to protect 60% of adults by July – sufficient for “collective immunity” to stop the virus spreading. But that would require boosting the current vaccination-rate from just a few thousand to more than 700,000 every day – and that’s just a single dose of the vaccine.

Despite Russia touting its most widely available jab, Sputnik V, as the world’s first and best, interest at home is low and falling.

A Levada-Center poll suggests the number of Russian opposed to getting it rose to 62% in February, with most citing concerns over possible side effects despite the fact Sputnik proved safe and almost 92% effective in trials.

Many also see no urgent need for protection. There’s been no lockdown here since spring 2020, the number of new infections is currently falling and the death toll from Covid is barely mentioned.

The daily count has reached 95,818, though the number of excess deaths recorded so far is some four times higher.

Meanwhile, enthusiasm for Russia’s main vaccine has been increasing abroad.

On Tuesday, Vietnam became the 56th country to register Sputnik and Russia says it has done deals to supply 700 million doses of the vaccine overseas.

But it’s unclear when that demand can be met.

Russia plans to transfer the technology for production abroad but Sputnik’s backer, the Russian Direct Investment Fund, will not answer questions about any current supply from overseas facilities or its targets.

In a call with scientists and producers on Monday, President Putin was full of praise for their achievements with three Russian vaccines now registered for emergency use, including EpiVacCorona and CoviVac.

A batch of a new version of Sputnik V that doesn’t need freezing has just been distributed and trials on the one-jab Sputnik Light have concluded.

But scaling up production has proved complicated.

Total vaccine output will increase to 12.5 million “units” of two doses in March, according to the industry ministry, with an extra five million units added in April.

Still, there have been reports of shortages in some Russian regions.

One clinic the BBC visited this month in Perm admitted it had run out of the first dose of Sputnik and didn’t expect more for several days.

Putin back to business

Now he’s been vaccinated, it’s possible Russians could be seeing more of Mr Putin in the flesh.

He has spent much of the pandemic working from his official residence outside Moscow. Those meeting him in person have had to quarantine first.

The Kremlin says he is getting vaccinated now in order to have the “necessary level of immunity” to get back to travelling and working, ahead of parliament elections in autumn.