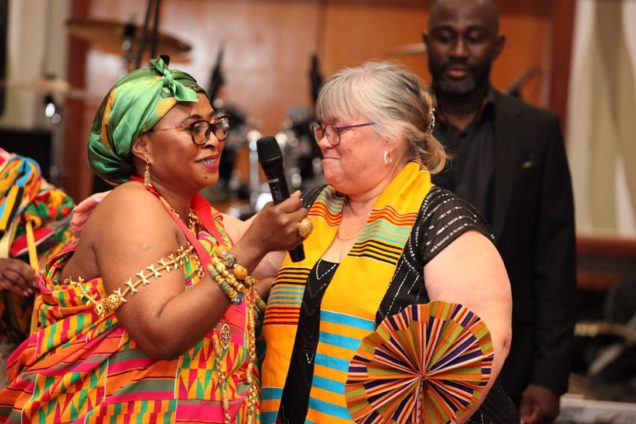 A former Mayor of Luton and Founder of Ghana Society UK (GSUK) in the United Kingdom Councillor, Maria Ampah Lovell (MBE), has called for the institutionalisation of a National Kente Day in Ghana.

Speaking at the end of this year’s Kente Festival (dubbed Kentefest ‘21) which was held in Luton from October 29, 2021 to November 28, 2021, Councillor Lovell said the key message she wants to tell government to invest in Kente.

“Having organized Kente Festival for more than a decade now, and having observed how this treasured Ghanaian cultural heritage is enamoured around the world, I think it is about time the Government of Ghana and the traditional authorities in the country stepped up strategic efforts to promote the Kente cloth, internationally.”

Councillor Lovell who is of Ghanaian descent and became the first African woman to be elected mayor of Luton in September 2020 reminisced: “When I was growing up as a child in Ghana, I remember there used to be a special day around Easter where Kente was worn by almost everyone to church. As children, it was always a momentous occasion we feverishly looked forward to on the calendar each year.”

She continued: “In those days, the world was not as commercially connected as it is today. And so we could not do much to put this special cloth on the international market. However, things have evolved now and we need to take advantage of the new global opportunities it presents and harness this cultural heritage.

Touching on how this can be achieved Councillor Lovell intoned that, “as the saying goes, charity begins at home, and so I would like to propose the institutionalization of a National Kente Day in Ghana to celebrate our pride in this symbolic cloth which is now worn globally. On this special day, Ghanaians, both home and in the Diaspora, must be encouraged to adorn themselves with the Kente fabric in its vibrant colours.

According to Councillor Lovell, there are enormous benefits that can accrue to Ghana through

the promotion of the Kente cloth.  She explained: “I believe that if we re-ignite the national interest in the Kente cloth, it will be a huge booster for the Ghanaian economy. Firstly, it will create employment for the artisans as a vocation. Secondly, it will encourage the artisans to transfer their knowledge and craftsmanship to the next generation; training both male and female to carry on this legacy. And thirdly, it would also generate foreign exchange for the country whilst attracting tourists to the kente weaving districts.

Councillor Lovell who is also the Kente Nkosuohemaa (a.k.a Nana Abena Asantewaa I), concluded by charging the “National Commission on Culture, a key partner of this year’s festival to initiate consultations on the subject with the Ministry of Tourism, Arts and Culture, Ministry of Chieftaincy and Religious Affairs, and the broad Ghanaian society for consensus on this proposal which I believe should be declared as early as next year to coincide with Ghana’s 65th Independence anniversary celebrations on 6th March 2022.”

The Kente Festival has been running in the UK since 2009.

The theme for this year’s celebration was “Harnessing the Kente Heritage: Enhancing Inclusivity of Indigenous and Diasporan Communities towards Participatory Socio-Economic Development and Global Peace.”

Each year the festival’s gala and dinner dance is used to raise funds to support a charity cause. This year, the patronage was in support of the participation of the National Paralympic Committee of Ghana (NPC-Ghana) in the 2022 Commonwealth Games which will be held in Birmingham, United Kingdom.

There are ongoing discussions led by Councillor Lovell for Luton to be adopted as the Games Village for the Ghanaian contingent to the Commonwealth Games.

The festival was attended by a high pedigree of guests that included Her Excellency, Madam Rita Tani Iddi, Ghana Deputy High Commissioner for UK, Her Majesty’s Deputy Lieutenants, High Sheriff of Bedfordshire, Police and Crime Commissioner, Rachel Hopkins, MP for Luton North, Cllr Farzana Kharawala, Mayor of Leighton-Linslade, as well as Councillors and Traditional Chiefs and Queen Mothers from Ghana.

Earlier in the month, there were activities that included drumming and dancing workshops in schools, exhibition of Kente and other arts and crafts made in Ghana at the Luton Shopping Mall.

The activities were highly patronized by Ghanaians and other Africans in the Diaspora as well as local residents of Luton.