Coutinho out injured until January 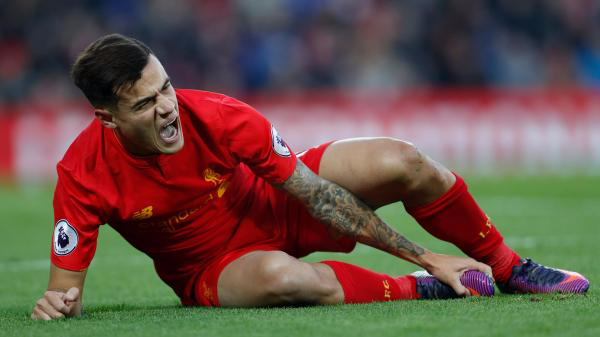 Brazilian Philippe Coutinho went for a scan on his ankle today after being injured in the 2-0 win over Sunderland.

Liverpool manager Jurgen Klopp said in his press conference today that the club were still waiting on the scan results.

But reports suggest Coutinho will be out for around six weeks – meaning he will miss these eight Liverpool games.

"The best thing would be he is not out but it isn’t likely," Klopp said.

"We have to wait for the final scan. We know what it will probably be."

Liverpool are already without playmaker Adam Lallana, who was injured on England duty during the international break earlier this month.

Coutinho arrived at Liverpool Spire Hospital today for his scan.

He is believed to have damaged his ankle ligaments in a collision with Sunderland's Didier N'dong.

The 24-year-old is set to miss a host of crucial games for the Reds as they push for the Premier League title, including the Merseyside derby and a tie with Manchester City.

He is Liverpool's joint-top scorer this season alongside Roberto Firmino and Sadio Mane on six goals.