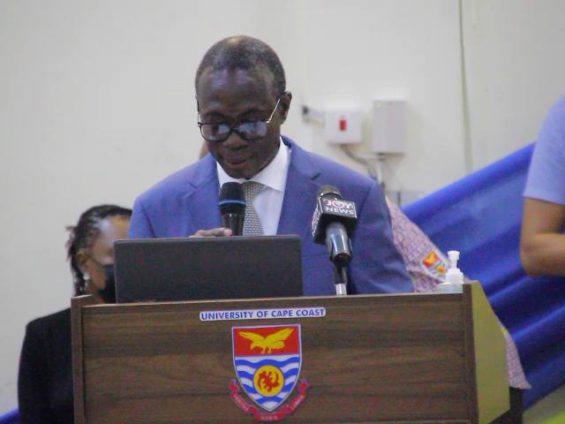 The Vice-Chancellor of the University of Cape Coast, Prof. Joseph Nyarko Boampong has indicated that though the COVID-19 pandemic has been devastating to many economies across the globe, it has helped many African universities define their peculiar solutions.

He said many African universities, including the University of Cape Coast, have been compelled by the pandemic to innovate and research into areas that hitherto were not being considered.

“Beyond being the worst pandemic ever, COVID -19 has helped African universities to better define their peculiar solutions and chart unique paths forward. Now, UCC scientists are breaking grounds in several innovations such as artificial intelligence and several other diseases, drugs, and pest varieties of plants and animal species that are needed for high productivity and economic growth,” he stated.

Speaking at the University of Cape Coast’s Best Researcher Awards and Researcher Support Grants ceremony, he indicated several breakthroughs in research by the University’s scientists that would be beneficial for the local communities and Ghana as a whole.

Additionally, he indicated that, in some respect, UCC has had a head-start because their pre-pandemic research agenda for the period 2018-2022, which is captured in the mission of the University, the National Development Plan 2057, the African Union Agenda, 2063 and the SDGs, addresses some of these issues.

Prof. Joseph Nyarko Boampong stated that the Directorate of Research Innovation and Consultancy (DRIC) has begun compiling the UCC innovations report as part of their 60th anniversary celebration.

The Director of DRIC, Prof. Ato Armah, indicated that the Innovators across the five Colleges at the University of Cape Coast face very different circumstances regarding such factors as financial demands, time to produce and intellectual property protection. These differences, he indicated, call for nuanced institutional policy approaches.

According to him, the DRIC is currently leading the development of the first-ever UCC Innovation report as part of the University’s 60th anniversary celebration.

He stated: “It is refreshing to note that UCC faculty, irrespective of college, have been at the forefront at the development of innovation.”

The UCC Best Researcher Awards and Research Support Grant has been in place since 2015. It is to improve research excellence and innovation at the university and help seek local, national, and international solutions.

The University’s Management with the support of the Governing Council increased the research amount from GHC600,000 to GHC1million.