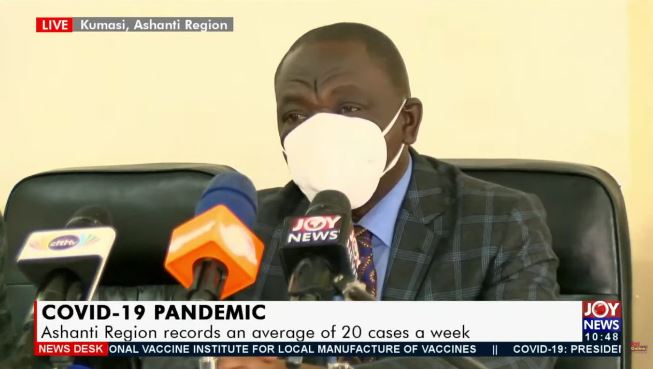 The Ashanti Regional Director of the Ghana Health Service, Dr Emmanuel Tinkorang has warned against the perception that one could disregard the Covid-19 safety protocols once fully vaccinated.

According to him, receiving two doses only reduces one’s risk of being infected.

“The fact that you’ve had two doses doesn’t mean that you are totally immune. It only boosts your immune system to reduce the severity of the infection to prevent mortality,” he said.

Addressing the media on Monday, July, 26, the Regional Health Director noted, that it is vital to continue abiding by the safety protocols jealously.

“Because our vaccination coverage is low, it’s not up to even herd immunity, that we can say that everybody has been vaccinated, so you can just go about and disregard the protocols,” he apprised.

He, therefore, stressed that people who have received the jabs should not, “go and say that I have been vaccinated, two doses, so I can go about doing my normal thing, no.

“Even if you’ve vaccinated, the two doses, you would have to make sure that you adhere to the protocols,” he warned.

He further indicated that: “if you do that, it’s likely that you may have a very severe condition in the sense that you will get other people infected and then you can transmit it to other people who are not vaccinated.”

Dr Tinkorang was addressing the media following the surge of Covid-19 cases in the Ashanti Region.

The region is reported to have recorded an average of 20 cases a week, a situation the Regional Health Director, attributed to the disregard for the safety protocols, describing it as worrying.

Meanwhile, President Akufo-Addo on Sunday, July 25, announced that anyone found disregarding the protocols, especially in public places, as the country currently battles with the Delta variant, “would have him or herself to blame.”