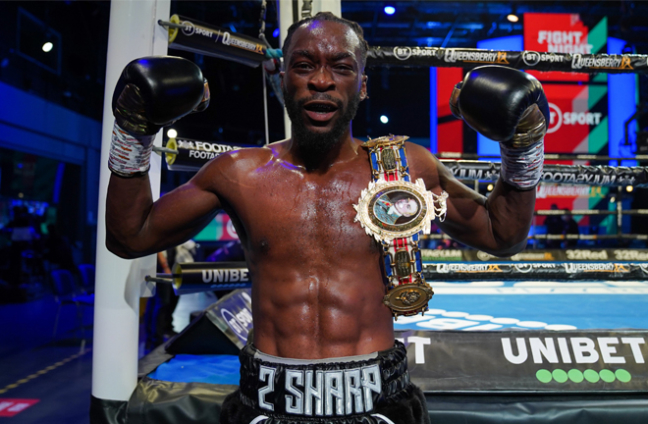 Ghana’s British middleweight champion, Denzel Bentley (Denzel Ntim-Mensah) will subject his unbeaten run in the sport to a major test while seeking to snatch the Commonwealth title from its current holder champion Felix Cash on Saturday.

The 26-year-old’s job description is a complex one which also requires that he hands Felix Cash his first professional defeat.

“I feel great ahead of this fight. I feel like this is my coming out party to properly announce myself to the boxing world as a threat,” he told Joy Sports in an exclusive interview from London.

Denzel Bentley, based in Battersea, London, is undefeated in 15 fights consisting of 14 wins and a draw with a dozen of the wins coming by knockout.

During his last holiday in Ghana, he expressed the desire to fight for and win the Commonwealth title as a big foundation to break into the circle of major world titles and mega fights. He has great inspiration from Africa’s greatest boxer Azumah Nelson whom he met in Accra last December.

“I admire Azumah greatly for the fact that he came out of a place where nobody thought it was possible yet managed to make such global achievements. It is a big deal,” he told Joy Sports in an earlier interview.

He won the British title in November last year after his punishment forced his opponent Mark Heffron to retire in the fourth round.

“I feel my opponent is good coming from a good amateur background and boxing team Great Britain but this is the Professional Game.”

It’s different and I’ve proved and still proving to be a great fighter.” Denzel told Joy Sports moments after the weigh-in.

Cash, 28, (13-0, 9kos) is an orthodox with a big punch that has helped him dispatch nine out of the 13 opponents via technical knockouts.

In October 2018, he recorded a unanimous decision over Dutch man Stephen ‘The Chosen One’ Danyo to claim the WBC International silver title and followed with a TKO win over Nigeria’s Rasheed Abolaji to annex the vacant Commonwealth title.

The Brit has since defended the title successfully against Jack Cullen and Jason Welborne, both of whom he dispatched via technical knockout wins.

The bout will be staged at the York Hall in Bethnal Green.

DISCLAIMER: The Views, Comments, Opinions, Contributions and Statements made by Readers and Contributors on this platform do not necessarily represent the views or policy of Multimedia Group Limited.
Tags:
Commonwealth middleweight
Denzel Bentley
Ghanaian boxer