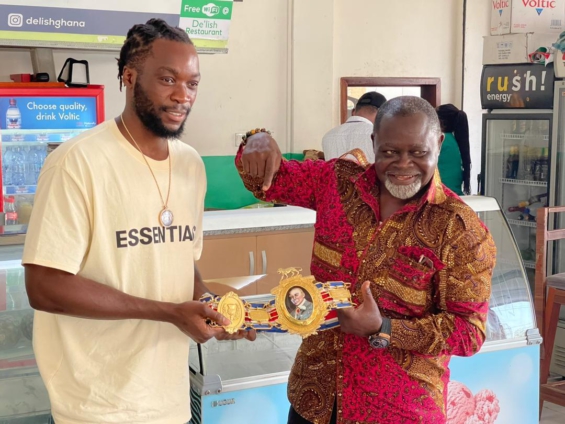 The young boxer told Joy Sports in a recent interview that he draws great inspiration from the two legends for various reasons.

Bentley who is known in the ring as ‘Too Sharp’ annexed the British Middleweight title after defeating Mark Heffron on November 13 in Stratford.

“Azumah’s talent took him to the US and made him Africa’s greatest boxer. I’m sure at some point he thought it was impossible but his talent took him all the way to the States to become one of the greatest fighters to come out of Africa,” he told Joy Sports.

The young boxer also told Joy Sports that he was fascinated by Azumah’s journey especially because he came from a not so privileged background and managed to achieve such greatness in the sport. Denzel subsequently met the legend a week ago and described the moments as a great privilege.

On Ike Quartey, Denzel Bentley observed “he had great movement and played with a lot of opponents in the ring. He made boxing look easy.  I’d like to meet him to know his mindset going into the ring. He was just a great fighter.”

Azumah remains Africa’s greatest boxer, after being the first to be inducted into the International Boxing Hall of Fame, after remaining a WBC champion for 10 years. Azumah over the years also assumed statesmanly status in his native Ghana and has organized some of the most successful fight nights through his Azumah Nelson Promotions, with fights beamed across the African continent. Azumah was also recently named one of the WBC’s two greatest super featherweights of all time.

The then President of Ghana, J.A. Kufuor, decorated Quartey with a grand medal of the Republic of Ghana in 2008 for his contributions to boosting the national image globally.

Three comeback fights after a five-year hiatus, in the year 2005, earned him the Comeback Boxer of the Year accolade for 2015 by the celebrated ring magazine. Ike ‘Bazooka’ Quartey also had a trademark right jab that was highly rated by the ring magazine as one of the best in the pound for pound history.

DISCLAIMER: The Views, Comments, Opinions, Contributions and Statements made by Readers and Contributors on this platform do not necessarily represent the views or policy of Multimedia Group Limited.
Tags:
Azumah Nelson
Denzel Bentley
ike Quartey