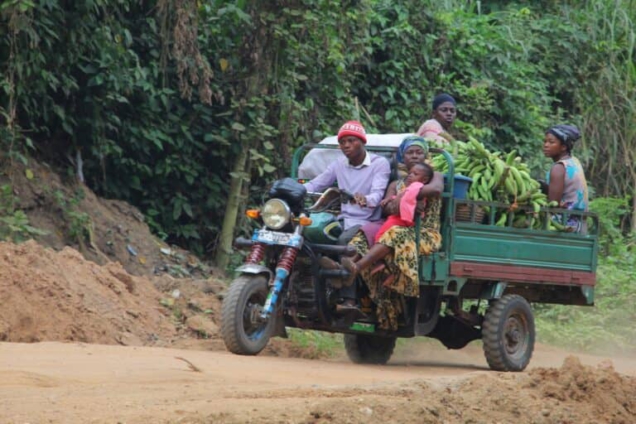 Farmers at Mangoase and adjourning villages in the Akuapem North Municipality of the Eastern Region continue to struggle to transport their farm produce to market centers due to deplorable roads in the area.

The communities, Aboabo number 1&2, Tieko, Gbolu Kofi, and Adawso remain the food basket in the municipality but the roads connecting them are unmotorable.

The movement of heavy-duty vehicles carting sand in the area has worsened the already deplorable road from Mangoase to Adawso while erosion has washed away portions.

The road becomes unmotorable anytime there is a downpour.

Due to the poor nature of the road, motorbikes, tricycles, and rickety vehicles are the only available means for farmers and traders to transport their goods.

“There are lots of food from this area. Whenever it rains, the road becomes unmotorable. We have to get down to push the car and tricycle transporting our farm produce. It has made things difficult,” Gladys Brown, a farmer lamented.

Another farmer said, “We supply food to Adawso and Nsawam but the roads are bad. Two weeks ago, we had the tricycle which was transporting us crashed and one person was seriously injured. I am told her leg will be amputated so we are begging them to fix the road for us”.

But after struggling to transport farm produce on the poor road, farmers say where to sell them becomes a challenge.

Drivers who endure commuting on the road say they experience frequent breakdowns of their vehicles.

“We have MP Ama Dokua, she comes here once in a blue moon. So our MP must do something about our road for us. Whenever it rains we struggle to work. Sometimes we the drivers embarked on communal labor to repair the road because it is causing damages to our vehicle. We have been buying spare parts almost every week,” a driver narrated.

In September 2020, Mangoase Youth Association led by Highlife Musician, KK Fosu demonstrated over the deplorable nature of roads in the area.

Residents have questioned whether the Year of Road mantra by the government is a reality or myth.

“The government says this is the year of road. Where are the roads? In Akuapem-North nothing is happening. Meanwhile, this is where the President comes from. Apart from the asphalt overlay in Akropong Township, nothing is happening” a former assemblyman stated.

DISCLAIMER: The Views, Comments, Opinions, Contributions and Statements made by Readers and Contributors on this platform do not necessarily represent the views or policy of Multimedia Group Limited.
Tags:
Adawso and Tinkong
Deplorable Roads
Mangoase