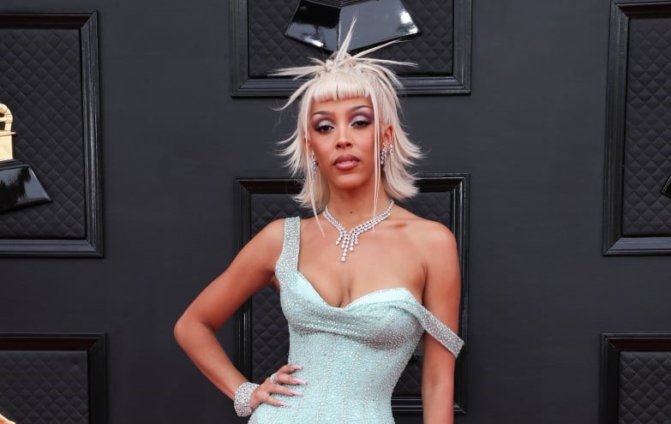 Doja Cat is up for eight awards at the 2022 Grammys, and the rapper and singer arrived on the red carpet in a sheer, sea foam-colored Versace gown looking like Grammys royalty.

The off-shoulder look is dripping in crystals and features a corseted bodice. She paired it with matching platform shoes and glittering diamond jewelry — but the most curious accessory was her glass purse from Coperni, filled with candy.

Doja stood out against many red carpet looks in hot pink, including Chrissy Teigen, Billy Porter and Saweetie, and jet black, such as Billie Eilish and Halsey. But her spiked bleach blonde hair, reminiscent of Gwen Stefani and Pink was right at home with other nods to Y2K fashion on the carpet, including a choker necklace worn by Olivia Rodrigo.

The hosts of E! News declared in their fashion livestream that “It’s Doja Cat’s planet and we’re just living in it,” while viewers took to Twitter to call her look “divine” and “breathtaking.”

Last year, the 26-year-old performer showed up on the red carpet in a black mullet and a bold, punk look: a Roberto Cavalli gown that featured a black-and-cream motorcycle jacket and a voluminous neon-green feathered skirt.

Doja Cat is hoping to nab both the Song of the Year and Album of the Year tonight, up against artists including Eilish, Rodrigo, Lil Nas X and Kanye West. Her third album “Planet Her” spent half a year in the Billboard 200’s Top 10 — a first for a female rapper.