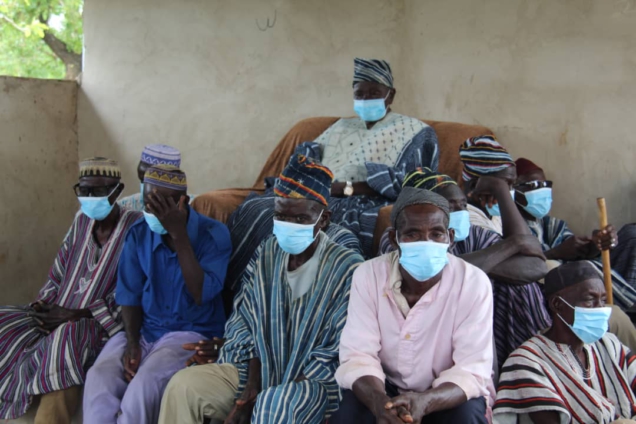 The Paramount Chief of the Kusawgu Traditional Area in the Central Gonja District of the Savannah Region, Kusawguwura Alhassan Soale Bunyanso II has warned that no one has the right to attack or lynch anyone on suspicion of being a witch in his traditional area.

He said such matters should be reported to the palace to stop people from taking the law into their hands.

The Kusawguwura said this when the reintegration committee of alleged witches paid a courtesy call on him at his palace to congratulate him for his elevation and to solicit his support in the fight against on violence women against women accused of witchcraft.

The Secretary of the Traditional Area Kilibuwura Amidu who spoke on behalf of the chief said elders and sub chiefs within the area have begun the sensitization in their various communities.

Kusawguwura said he will continue from where his predecessor left off by enforcing by-laws to deal with people who inflict harm and instant punishment on alleged witches recounting the incident in Kafaba where a 90-year-old Akua Denteh was beaten to death.

She said the committee has also reintegrated and reunited some inmates of these camps with their families and relatives.

The camps closed are Bonyanse in the Kusawgu traditional area and Naboli in the Gushegu Municipality with Gambaga in the North East Region, Gnani, Kukuo and Kpatinga all in the Northern Region still outstanding.

“We have six camps located in these regions and through our work and with support of our partners, collaborators, the reintegration committee members, we have successfully closed down two camps in Bonyase in 2014 supported by the late Kusawguwura and Naboli in 2020 respectively,” she said.

Ms Alia said as an organization their focus is to make sure that they get many of these women who are old and weak back home to enjoy family support.

She said Action Aid is concern about the maltreatment handed women accused of witches adding that any form of violence against women should be of national concern.

The Program Officer noted that violence in any form against any person is a crime that is against the laws of Ghana.

She said the reintegration of these women is a process and as a committee, they make sure that due diligence is done to guarantee the safety of these women before they are reunited.

The Northern Regional Coordinator of Domestic Violence and Victim Support Unit (DoVVSU) of the Ghana Police Service DSP Emmanuel Holortu said issues of witchcraft allegations has become a gender base violence that affects most women.

He said these women when they are accused are beaten, humiliated and sometimes killed the reason DoVVSU is a technical party in the committee.

DSP Holortu urged camp owners not to abuse and exploit people who are banished from their communities to their camps.

“Sometimes you go to the camp you find that the people are exploited because benevolent people come and donate properties for the upkeep of those people,” he said.

DSP Holortu said for Dovvsu they would be glad there is no witch camp in the system.

The Coordinator thanked the Paramount Chief for his commitment and support to lead the course to protect women.

The Reintegration program is spearheaded and supported by the Action Aid Ghana in collaboration with the Domestic Violence and Victim Support Unit (DoVVSU) of the Ghana Police Service, Commission on Human Rights and Administrative Justice (CHRAJ), and Ministry of Gender with funding support from the Australian Aid.