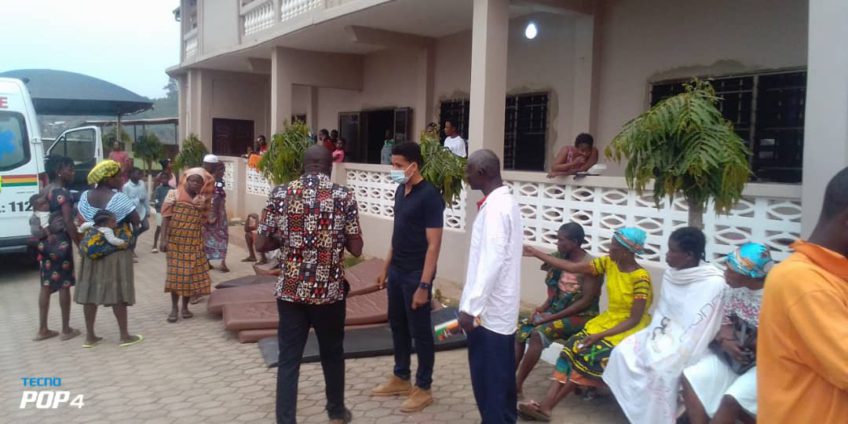 Several households at Apeatse near Bogoso have been destroyed after Thursday’s explosion which reduced the whole community to debris.

Survivors of the unfortunate incident have been rendered homeless after almost 95% of the houses in the community were ravaged in the blast.

The displaced residents have been relocated to a makeshift camp at the Bogoso St. Michael Parish Hall.

The devastation caused by the explosion has left many in shock as they are yet to come to terms with the magnitude of their losses.

“I was on the farm when the incident happened. We heard a loud blast while working on the farm. From what I’ve been told, there was a smoke gushing from the vehicle until it suddenly stopped on the road. A motorbike crushed into it, causing the blast. I lost a relative,” one of the residents recounted.

Most of the residents who spoke to JoyNews recounted the magnitude of their losses and expressed shock over the misfortune.

“We plead with the government to urgently come to our aid. Most of our friends and relatives have died while most are left in traumatic conditions. The situation was really terrible because all those who tried to rescue others also ended up dying,” another resident said.

Preliminary investigation, according to the Police, has revealed that “a mining explosive vehicle moving from Tarkwa to Chirano mines collided with a motorcycle resulting in the explosion.”

Ghana National Fire Service (GNFS) officials have been seen conveying what looked like bodies out of the rubble.

“Most of the victims have been rescued and are on admission at various hospitals and clinics within the Bogoso Municipality,” Police said in a post on Thursday.

In a Facebook post, the Police urged all residents to remain calm as “we manage this unfortunate situation.”

The Service has also appealed to nearby towns to open up their classrooms and churches to accommodate the surviving victims.